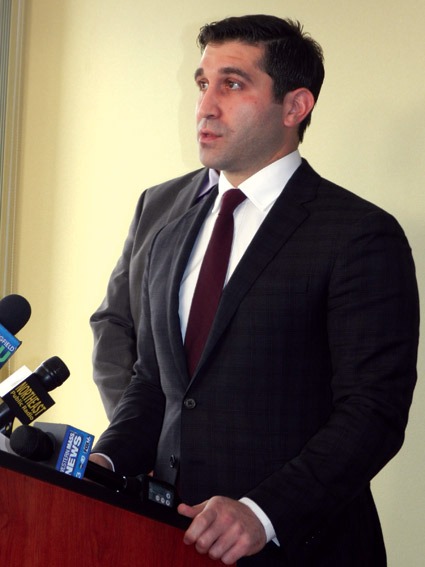 Gulluni made the announcement after a press briefing on Nov. 30 about the recent arrests and seizure of 30,000 packages of heroin and raw un-cut heroin.

Farak pleased guilty in 2014 to stealing drugs and tampering with evidence at a state lab in Amherst.

Gulluni said the cases being dismissed do not involve superior court cases as yet as those are still under reconsideration.

He added that he is “relatively confident” that no innocent people were convicted due to Farak’s actions.

Gulluni also admitted frustration with the amount of bail being set for people charged in drug distribution cases, an issue that came into play with the case he was discussing.

Josue Figueroa was arraigned on Nov. 22 in Springfield District Court on charges of Trafficking Heroin Over 200 Grams and Resisting Arrest. Bail was set at $50,000 cash and bail from a previous case has been revoked. He is currently in custody.

Gulluni noted that Figueroa had been arrested on June 15 and had in possession of 17,830 bags of heroin. He was arraigned in Springfield District Court on charges of: Trafficking Heroin Over 200 Grams, Resisting Arrest, and Trespass. His bail was set at $100,000, but at a bail hearing, requested by his attorney, on Sept. 19, his bail was lowered to $15,000, which is what the defense requested.

Gulluni said there have been “significant changes in how the bail system is operated.” He explained judges in Massachusetts must now consider the financial means of the accused when determining bail.

In the 2017 decision of Brangan vs. The Commonwealth of Massachusetts read in part, “In setting the amount of bail for a defendant, a judge must consider the defendant’s financial resources but is not required to set bail in an amount the defendant can afford if other relevant considerations weigh more heavily than the defendant’s ability to prove the necessary security for his appearance at trial.”

Gulluni said the lowered bail in the first case allowed Figueroa to get back on the street and “fuel the epidemic that is now in force.”

Also arrested in the case was Jonathan Grullon, 27, of Agawam, charged with Trafficking Heroin over 200 grams. He was arraigned on Nov. 28, in Westfield District Court; his bail was set at $5,000. The Commonwealth requested $50,000.  On Nov. 30, Jesus Figueroa, 32, of Agawam, turned himself in to law enforcement. He is the brother of the previously arrested Josue Figueroa. He has been charged with Trafficking Cocaine over 200 grams.

“Opioid abuse is at epidemic levels across New England and those suffering from Opioid addiction need access to treatment and recovery,” said DEA Special Agent in Charge Michael J. Ferguson.  “But, those responsible for distributing lethal drugs like heroin and fentanyl to the citizens of Massachusetts need to be held accountable for their actions.  This investigation demonstrates the strength and continued commitment of our local, state and federal partners and our strong partnership with District Attorney Gulluni’s office.”