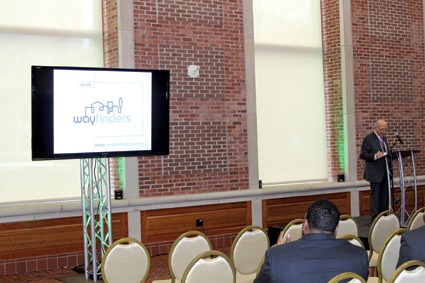 SPRINGFIELD – HAPHousing President and CEO Peter Gagliardi said he and the team that developed the new name for the housing organization kept the name such a secret that his own wife didn’t know what it was.

Gagliardi revealed that HAP would now be known as Way Finders at a press conference on March 31.

He also announced the organization will now have two affiliate groups that will transform the agency best known for housing to be one that can broaden its economic development activities.

MBL Housing and Development LLC, is a real estate development/consulting firm that has worked with HAP and other group to create financing plans for housing projects.

Gagliardi told Reminder Publications that people still think of HAPHousing as focusing on housing while the organization has grown to include other activities. With the two affiliates Way Finders can be more involved in economic development issues.

“I could call it a merger. They will operate under their own names as they have strong brands. They will continue to serve the clients they serve,” Gagaliardi said of the two organizations.

Way Finders will now have “six lines of business,” according to Gagliardi, which will result in “an integrated community development strategy.”

He added, “Together we can bring in more capital into the region from outside.”

Gagliardi explained HAPHousing first started in 1973 as the Housing Alliance Project, which was one of several experiment programs administering Section 8 housing.

When Gagliardi came to the agency in 1990 he said about two-thirds of its work centered on rental assistance.

“It has grown into many other facets,” he said.

Lynne Wallace, the executive vice president and COO of Way Finders, said the merger would result in the parent organization growing from 150 employees to 250 and revealed there will be several new projects announced in the near future, as well as a new user-friendly website being launched this month.