Could not find template: Explorer/default-display 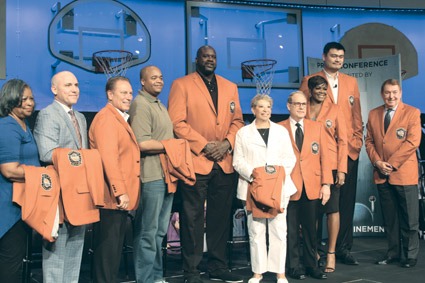 Accepting his basketball orange Hall of Fame blazer at the press conference the day before Enshrinement festivities last week, he flashed a debonair expression and did a turn on the stage like he was on a catwalk.

When fellow inductee Yao Ming’s 7-foot-6 frame proved too big for Hall of Fame President and CEO John Doleva, it was Shaq who sprang up from his chair to slip the Hall of Fame jacket over the towering former adversary’s shoulders.

Sheryl Swoopes jokingly accused O’Neal of trying to trip her on her way to the press conference podium, and then recounted how the 15-time All Star attempted to bribe her with $1 million if she intentionally fell in front of the cameras.

At the podium himself, he praised former broadcaster and 2013 Curt Gowdy Award recipient Eddie Doucette for “the sexiest voice in the Hall of Fame,” then welcomed Morgan, a young girl donning a Michigan State University shirt in the front row at the press conference, to get a photo with Spartans head coach and 2016 inductee Tom Izzo.

When meeting with reporters after the press conference, he pounded the table in front of a pile of recording devices as if performing a sound check, and then made light of Allen Iverson’s apparent absence ­– he did eventually turn up – saying, “We’re talking about the Hall of Fame,” a reference to Iverson’s “We’re talking about practice” rants, one of his most iconic moments with the press.

It was all Shaq doing what Shaq loves to do when it comes to the game of basketball – have fun.

But when it all came down to it, O’Neal did not lose sight of the significance of the honor of enshrinement.

“It’s very humbling to be here,” he said. “I was always told by a lot of others that I would be here, but I don’t believe in what people say until it happens. It’s a surreal moment. It’s a great feeling.”

O’Neal added the dates of Enshrinement and all of the corresponding events had been emblazoned in his mind since he learned of his selection.

“I actually had the schedule memorized. I don’t memorize a lot of stuff, but this I had memorized,” he said. “I bought about 1,000 tickets for each event so all of my family and everybody could be there.”

O’Neal, who finished his career seventh all time in the NBA in scoring, won four championships, made 14 All-NBA teams, and earned a Most Valuable Player award along with three NBA Finals Most Valuable Player trophies, among other accolades, was sure not to sell himself short when contemplating his accomplishments.

“I think I had an impressive career,” he said. While admitting he didn’t surpass Hall of Fame centers Bill Russell in championships or Kareem Abdul-Jabbar or Wilt Chamberlain in points, he still saw himself as the best at the position ever.

Taking aim at Chamberlain specifically because they had similar styles, O’Neal added, “There were one or two years where they said he was the best player, but my whole career was ‘He’s more dominant than the other player.’ That’s how I wanted to be remembered – as one of the most dominant players ever in the NBA.”

O’Neal argued had he not missed approximately 250 games in his career – “25 points per game at that time, that’s another 5,000 points” – there would have been no question as to who was No. 1.

“I’m really upset that I missed all of those games so I could pass [Chamberlain] up and jokingly say – or truthfully say – that I am the most dominant big man ever,” he said.

While O’Neal was the most decorated player in this year’s class, Iverson appeared to be the fan favorite. Throngs of basketball enthusiasts milling around the Hall of Fame donned No. 3 jerseys, baseball caps bearing the longtime 76ers star’s name and some families even coordinated with matching T-shirts.

The 11-time All Star’s absence from the ceremony at which he was supposed to receive his Hall of Fame jacket was conspicuous, but later he told media how much he valued it. Iverson, who faced his fair share of criticism and who many doubted could live up to his No. 1 overall draft selection due to his lack of size, said he reflected not only on the positive influences in his life, but also the negatives, when preparing his speech for the Enshrinement ceremony.

“This jacket is one I’ll always remember and cherish because of the significance of it,” he said. “It’s so many little guys – and  I’m not talking stature; I’m talking younger people – that’s going to learn from this experience. That’s what I get the love in my heart from. Little young guys can look at the obstacles I had to go through to become a Hall of Famer and know that it’s not so bad when it comes to them trying to accomplish the same goal.

O’Neil said Iverson “had a lot of heart.”

"We’re similar in the aspect of we did it our way,” he said. “He was a fierce player.”

In contrast to Iverson’s diminutive stature, Yao Ming took the NBA by storm with his enormous height while breaking the barrier of being the first Chinese player in NBA history.

While even the 7-foot-1 O’Neal looked up at him during their playing days, standing at the podium on the Court of Dreams, it was Yao who couldn’t keep from looking up, marveling at the faces of the game’s past watching from the Hall of Fame’s cavernous dome.

“When walking into this hall, for the first time, I feel I’m so small,” the 7-foot-6 Yao said. “I don’t know if Shaq agrees [but] I feel so small when I look up and see all the pictures around here. I see my picture up there. With those pictures up there, I can’t stop myself to think how small I am.”

When asked to reflect on what his groundbreaking career and induction into the Hall of Fame would mean to his countrymen, he simply stated, “I think I’m the wrong person to ask. I think you’d have to ask other Chinese fans.”

He added the support he received on many levels contributed to the honor.

“It’s very, very simple,” he said. “The treatment I’m getting today is from the benefit I had from so many – coaches, fans, teammates, opponents and also managers – and a little bit from everybody made me who I am today and I appreciate that.”

He also expressed gratitude to be entering the Hall of Fame with O’Neal.

“That makes it even more special,” he said “I think mainly he is a nightmare for a lot of basketball players and sometimes mine too. He was a competitor on the court that kept us driving to move forward.”?

Swoopes, a pioneer in her own right as the first player to sign with a WNBA team, spoke of leaving behind a legacy.

“I think the good thing about  myself and my group, with [retired WNBA players] Cynthia Cooper and Tina Thompson ... We knew, and I knew, it was time [to retire] and step away from the game, but I also felt  great sense of pride in being able to pass that game on to the next group,”?she said. “I looked at the WNBA as my baby ... so of course I felt some kind of way about the hands I was leaving the game in and it feels good to know that 20 years later I feel like the game is in a very good place.

“Is there still work to do? Absolutely, but I think that’s not only up to those players who are currently playing in the league, but all the former players to continue to talk about the game and promote the WNBA.

“I think where the game is with the level of talent there is right now, overall, it’s definitely a lot better than it was 20 years ago,” she concluded.

Izzo, one of just a handful of active coaches to be inducted into the Hall of Fame, said he was honored, but also happy he would be able to continue to build upon his legacy.

“I think that’s what I am proudest of, that it happened while I’m still working,” he said. “Now living up to that, you look at the group of guys who are out there and it has happened to, there’s not a lot of them between pro ball and college ball. To get in with a group like this and still have a day job is special. It does mean you don’t get to look back on it the same way.”