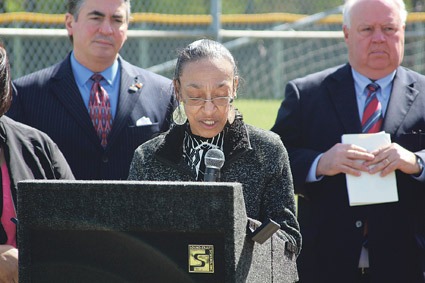 SPRINGFIELD – Howard Drew was one of the most famous track and field stars in the world during his prime at the turn of the 20th Century and his legacy was reaffirmed with the dedication of the track at Central High School in his name on May 16.

Mayor Domenic Sarno said he thought the backdrop of the City Championship Track Meet would be an appropriate time to announce the honor.

When asked if she thought she would ever see the day when her great-grandfather would receive such an honor and attention from his home town, Springfield school teacher Cynthia Roberson, replied with a simple, “No.”

She added, “The whole thing is a miracle that recognition has come about.”

Dean’s legacy has been explored by track coach Larry Libow, who noted at the dedication that 100 years ago on that date a riot nearly broke out at Madison Square Garden in New York City when people were not allowed entrance into the sold-out venue. The attraction was a race between the three people considered the fastest in the world. One of those was Drew.

“He was the best known sprinter in the world,” Libow said.

Libow has been in the forefront in the rediscovery of Drew and his career. His website at www.howarddrew.com has a detailed biography and many photos of Drew. While still a junior at Springfield High School, Drew represented the United States in the 1912 Olympics as a member of the track and field team. Although he competed, he pulled a muscle in the semifinals and was advised to stop running to prevent a permanent injury.

He recovered and set and broke records as a collegiate athlete.

Drew was unable to compete in the 1916 Olympics, which were cancelled because of World War I. he served in the Army as a supply sergeant and successfully performed in the “Pershing Olympics,” in which athletes from 22 Allied nations competed.

Drew did all of this under the cloud of racism, as he was African-American, Sarno noted.

Libow’s website records how in his later career, Drew successfully completed law school, worked as a lawyer and was appointed a judge in Connecticut. During his legal career he fought racism.

Roberson told Reminder Publications that even within her family her great-grandfather’s life story was not well known. She recalled how her grandmother stressed his educational achievements and how important education was, but not his fame as a runner.

Sarno said a plaque noting Drew’s legacy would be installed at the track.