Hundreds gather to pray for nation at Springfield City Hall 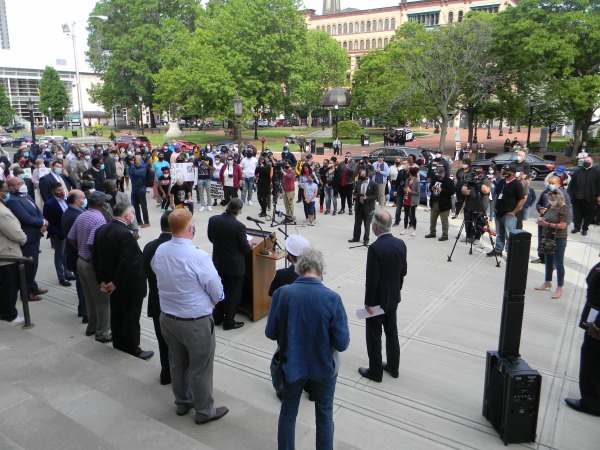 The steps of Springfield City Hall were the site for a prayer vigil on June 2.
Reminder Publishing photo by G. Michael Dobbs

SPRINGFIELD – A man playing the shofar – the sacred Jewish ram’s horn trumpet – stood at the top of the steps of City Hall, released a blast of sound to underscore statements being made by one of the many speakers below. It added an additional religious layer to the prayer vigil at City Hall on June 2 addressing the murder of George Floyd and the issues it has raised.

Several hundred people gathered to participate in the event. Some carried signs reading “Black Lives Matter.” Some brought children to witness the event.

Mayor Domenic Sarno said the murder of Floyd was “atrocious, unacceptable.” He added, “Justice will come to each and every one of those officers.”

“I, we, welcome protest and that’s the right way to honor the legacy of Mr. Floyd,” he said.

He asked the people gathered to be “ever vigilant” of outside influences and asked them to “respect Springfield residents, business and police officers.”

Congressman Richard Neal, chair of the House Ways & Means Committee, quoted Dr. Martin Luther King, Jr. by saying, “Let us realize the arc of the moral universe is long, but it bends toward justice.”

He noted he sat next to Congressman John Lewis in the House for many years and shared a message from the civil rights legend who marched with King in Selma, AL. Neal said Lewis wrote, “Rioting, looting, and burning is not the way. Organize. Demonstrate. Sit-in. Stand-up. Vote. Be constructive, not destructive. History has proven time and again that non-violent, peaceful protest is the way to achieve the justice and equality that we all deserve.”

Police Commissioner Cheryl Clapprood did not mince words about the four officers involved in Floyd’s death: “Those officers belong in jail.” Looking into the audience, she added, “We are on the same page. We agree what happened is wrong.”

Looking at the gathered clergy and elected officials he said, “We have the potential to set the pace for the nation.”