I-91 ramp, exit closures are just days away for viaduct 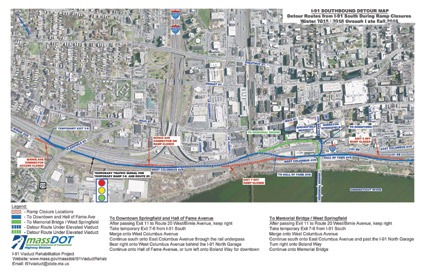 This map shows the closings and some of the detours facing motorists who use the I-91 viaduct.
Reminder Publications submitted photo

SPRINGFIELD – Wait for it – the closing of lanes and exits on Interstate 91 is imminent, but the Massachusetts Department of Transportation (MassDOT) is not quite ready yet.

At the meeting on Dec. 8 at the Basketball Hall of Fame, MassDOT officials said the preparations necessary for the closing of the lanes and exits will be heralded by an announcement five days before the event actually takes place.

The meeting was scheduled for two hours, allowing for time for questions, but concluded only after two questions were asked about 35 minutes after it started.

A new exit, West Columbus/Birnie Avenue Exit 7-6, has been built for Interstate 91 south for motorist to reach downtown Springfield, the Memorial Bridge and the Basketball Hall of Fame.

Ralph Romano, resident engineer, said the condition of the viaduct is “horrible.”

With the closing of the exits will come new signal lights to help move traffic on nearby city streets, a series of detour signs and traffic information signs to update motorists on conditions, Romano said.

“Traffic management is not an exact science. It responds to human behavior,” Romano said.

He added a towing company would be on call with a 10-minute response to help remove any disabled car that might impede traffic on the viaduct.

Taylor Rock, Worksite Outreach coordinator, for the MassRides commuting program of MassDOT, spoke about the services that could bring commuters using the viaduct together to decrease the number of cars using the highway. She cited the results of a survey of Interstate 91 motorists taken last year. Of the nearly 3,000 respondents, 94 percent is the viaduct; 96 percent drive alone. Nearly 40 percent say they have flexible hours and most people’s departure time from work is between 4:30 to 5:30 p.m. The MassDOT Nuride program (http://www.nuride.com/MassRIDES) helps creates carpools and van pools, Rock added.

Rock said workplace solutions to take some of the traffic off of the viaduct, especially during the time of its repair, is the establishment of an alternative work schedule, instituting tele-commuting by working at home and a shorter work with longer days.

Stage 2 will start in late 2016 to late fall 2017 at which time the travel lanes will shift and the remaining lanes on the viaduct will be replaced.

Romano said MassDOT expects traffic will be restored on the viaduct in the late fall 2017.

For more information, go to www.massdot.state.ma.us/i91viaductrehab.