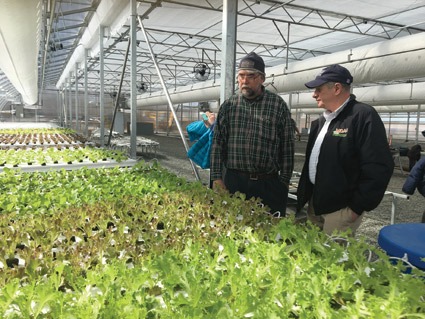 Wellspring Greenhouse Manager Stephen Hilyard and Massachusetts Commissioner of Agriculture John Leabeaux look over the first group of crops on its way to maturation at the new greenhouse in Indian Orchard.
Reminder Publications photo by G. Michael Dobbs

INDIAN ORCHARD – Where once was a brownfield, a new agricultural business has taken root.

Wellspring Harvest celebrated the completion of its new 15,120 square-foot greenhouse on Pinevale St., part of the property that was occupied by Chapman Valve.

The for-profit business has hired four residents of Indian Orchard and is headed by a Springfield resident to produce a number of different greens all year-round. Customers include Baystate Medical Center, Sodexo – which supplies food to Springfield Public Schools –  and Big Y World Class Markets.

On April 20 Massachusetts Commissioner of Agriculture John Leabeaux noted the Earth Day weekend by touring the greenhouse. Fred Rose, of Wellspring Cooperative, the non-profit that is the parent organization of the greenhouse business, explained the greenhouse is a $1.5 million investment and was the recipient of $65,000 from the Commonwealth.

“The neighborhood has really embraced it,” Rose said.

Rose said the project has been four years in the making and one year in construction. Greenhouse Manager Stephen Hilyard explained the production of the first set of greens is now underway.

The greenhouse uses  a hydroponics system and Betsy Johnson, a member of the Wellspring Cooperative board called it “as much a machine as a greenhouse.”

The greenhouse has a motorized roof and wall vents that allow for the control of both temperature and humidity. A mechanical shared curtain can control the amount of heat in both summer and winter to reduce energy costs by 40 percent.

Over the tables on which rest the vegetable beds is a monorail system that allows greenhouse workers to move the crops easily from one area to another.

Hilyard has been working in greenhouses for years and used that experience to avoid problems at the Wellspring facility.  He noted the growers there will be able to produce greens for growing ethnic markets

He added there would be school tours to show students one aspect of food production.

Leabeaux, who has much personal experience in agriculture, said, “It’s very exciting what is going one here.