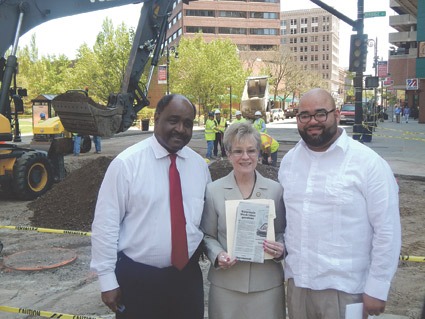 SPRINGFIELD – City Councilor and Chair of the Maintenance and Development Committee Kateri Walsh plans to address the state of the city’s infrastructure with a series of roundtable meetings with state and local officials in the coming weeks.

Walsh, as well as City Councilors Bud Williams and Adam Gomez, staged a press conference on May 11 near the site of reconstruction to roadway in the downtown intersection of Main and Bridge streets, where a water main break occurred the week prior that created a large sinkhole, flooded the street and created power outages in nearby buildings, including Tower Square.

An underground cast-iron pipe, which ruptured on May 4 and caused the water main break, was more than 100 years old, Walsh said. The pipe was installed when William Howard Taft was president of the United States.

“Certainly, technology has improved since 1909 and in 2016 we do not want to jeopardize our citing projects,” she added.

She said given these new developments and the high number of existing businesses in the city, she believes addressing infrastructure issues should be a top priority.

“Just to the east on this street, behind us is DevelopSpringfield working with Valley Ventures and with help from the city and state is building a $4 million innovation center, $2.2 million of which is a state grant,” Walsh said. “Further north, we are redeveloping the long awaited Union Station and behind us MGM is doing the largest development ever in the history of the city.”

Walsh said she would seek to understand whether there is a comprehensive plan in place to replace aging infrastructure.

“With MGM and Union Station and other developments coming online, we need to know what stress might be coming from these developments,” she noted. “I will ask the mayor and his team to be part of this discussion as well as our state and federal partners.”

She told Reminder Publications after the press conference state and federal officials might be able to suggest a funding source to address the needs of infrastructure repair and maintenance.

Williams said he believes the city needs to be proactive about maintaining infrastructure in the city.

“Can you imagine – MGM’s up and running and this happens?” he asked. “This is a big investment. This is real serious and I think this committee will be proactive and try to bring a coalition together.”

Gomez said while he believes Springfield should be a beautiful city, it’s important that the city isn’t “sinking under us.”

He added, “I believe the current administration is doing what they can to hurry a lot of these repairs, but we have to make sure and bring other awareness … There’s 500 gas leaks around the city of Springfield now. We need a timeline of what’s going on and when is this stuff going to be looked at because a couple years ago we had an explosion down here in this district. I want to make sure that our residents are safe and people that want to invest into this neighborhood, into the city of Springfield, are making the right investments and their investments aren’t going to fall short.”

“We’re just looking for a downtown location,” she noted.