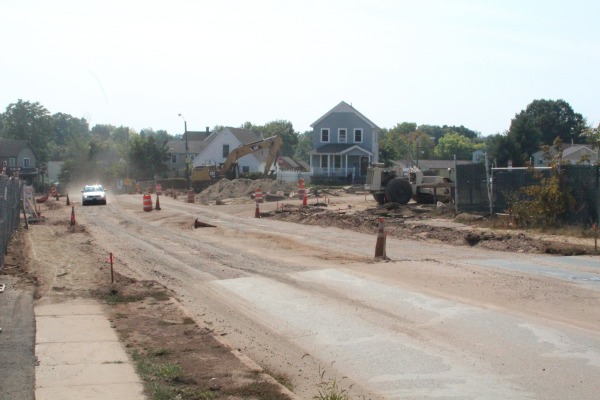 Central Street is being realigned and improved. The street will extend over Hickory Street to create a new intersection with Walnut St. and to improve traffic flow.
Reminder Publishing photo by G. Michael Dobbs

SPRINGFIELD – The opening of a $4.2 million roundabout is among several infrastructure improvements coming to the Six Corners Maple High neighborhood.

The roundabout takes the place of a traffic light at the intersection of Walnut, Hancock, Ashley and Alden streets.

“It’s a welcomed addition to the neighborhood,” Mayor Domenic Sarno said last week. “Everyone loves it.”

Sarno cautioned people with a smile not to refer to the new traffic feature as a “rotary.” According to a University of Massachusetts College of Engineering study, “Rotaries are much larger and allow traffic to move at a higher rate of speed, while roundabouts are smaller in diameter with traffic moving much slower.

The city’s Department of Public Works (DPW) said of the former intersection, “The Six Corners intersection became a focus due to its unusual configuration and significant accident history, which placed it on the list of the top crash sites in the region.”

The roundabout is the first of the projects underway in the neighborhood. Sarno noted the reconfiguration of Central Street, the construction of a new Ruth Elizabeth Park and the redevelopment of the former Brookings School are in various stages of completion.

The roundabout had its origins in community meetings following the June 1, 2011 tornado, Chris Cignoli, the director of the DPW, explained. He noted some residents had a difficult time imagining how a roundabout could be constructed there, but he added, “It’s everything we envisioned.”

The state approved the project in 2015 when it was awarded funding. Cignoli said the city had to take the location of a gas station by eminent domain at the intersection for the necessary space for the roundabout.

Cignoli said the intersection is now safer for pedestrians as crosswalks clearly mark a way for walkers.

Although at first glance one wonders if the roundabout is large enough to accommodate large trucks and trailers, Cignoli pointed out the design of the roundabout allows trucks more room, while directing car traffic to stay in the lane.

The center of the roundabout has some preliminary landscaping, but Cignoli said the plan is to put the area up for “adoption” and have either individuals or a group care for it.

Cignoli said he had several other locations in the city under consideration for a roundabout. He declined to say just where at this point.

At Ruth Elizabeth Park, a new splash pad and playground have been installed as well as a small pavilion. Grass has most recently been planted.

Several buildings were taken by eminent domain, Cignoli said, and the new roadbed on the Hickory Street leg is being constructed.

City Councilor Melvin Edwards, whose district includes the neighborhood, expressed his appreciation for the roundabout and the other projects and said, “There is so much to be proud of.”