Inmates save the city thousands of dollars 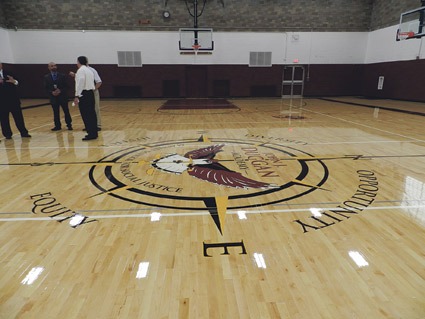 Much of the work to revive the auditorium was undertaken by inmates in a program that teaches them job skills.

“We’re giving the inmates the ability to give back to the community,” Hampden County Sheriff Nick Cocchi explained during a tour of the school on Sept. 20.

Patrick Sullivan, director of Parks, Buildings and Recreation Management, explained the inmates fixed the ceiling, re-made the acoustic panels on the side walls and removed all the seats, painted and upholstered them. The city out-sourced some of the new features such as a new curtain and carpets, but Sullivan noted the work done by the inmates accounted for a savings of $300,000.

Duggan Academy Principal Michael Calvanese said the reaction from the students has been positive. “The kids noticed it … they were so enthused,” he said.

“In collaboration we can really do some great things,” Warwick said.

Cocchi said, “It’s an honor to continue this partnership and collaboration with the city of Springfield and to have the inmates give back to the community, while saving the taxpayer money. Importantly, the inmates are learning valuable and marketable workforce development skills that they will be able to use when they re-enter the community.”