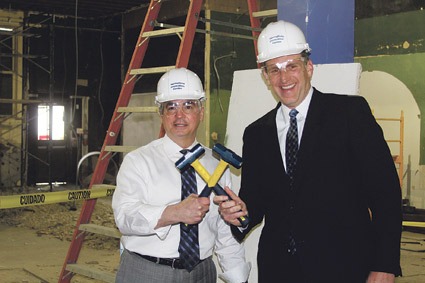 Mayor Domenic Sarno and Jay Ash, the secretary of Housing and Economic Development for the Commonwealth of Massachusetts prepared to ceremoniously “break” ground at the Springfield Innovation Center.
Reminder Publications photo by G. Michael Dobbs

SPRINGFIELD – In a building that has had several chapters in its long life, another officially started last week signifying Springfield’s future.

Local and state officials gathered on April 29 for a “groundbreaking” for the renovation of the Trinity Block building that will be transformed into the Springfield Innovation Center.

DevelopSpringfield will manage the building, but Valley Ventures Mentors (VVM) will be the primary tenant, Executive Director Paul Silva of VVM explained to Reminder Publications. The group, which provides advice and guidance to local entrepreneurs, will have offices and facilities in the basement as well as the first and second floors. There will be additional tenants on the third floor.

Silva added Develop Springfield would also be looking for a business to operate a first floor café.

Silva expects VVM will be in the new offices in January 2017 and said next year there would be more than 100 start-up businesses in the space.

The building was originally the site of Trinity Methodist Church built in 1869. That church was demolished and replaced by the current building in 1922. Designed by Springfield architect Samuel M. Green, it originally was five separate buildings with one shared façade. Most recently the building was home to a gym and previous to that a nightclub. An adjacent space had recently been a restaurant.

The building sits in the center of the city’s Innovation District and Mayor Domenic Sarno announced that within the next four to five weeks there would be more announcements about the district.

Around the corner from the Trinity Block, MassDevelopment is seeking tenants for the former Skyplex building at Stearns Square.

Jay Ash, the secretary of Housing and Economic Development for the Commonwealth of Massachusetts, said Springfield “has something special going on here.”

He explained the collaboration between elected officials, the business community and organizations such as VVM that has made the Innovation Center possible “is a vision I’d like to replicate everywhere in the Commonwealth.”