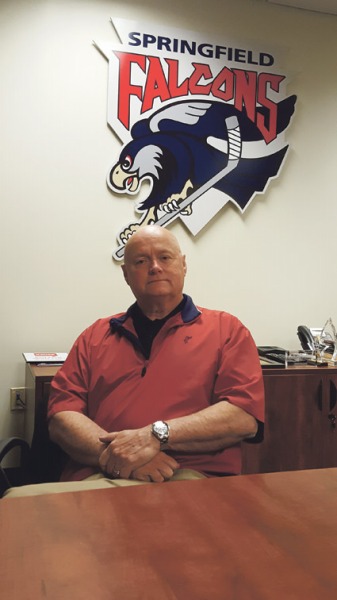 SPRINGFIELD – At the Springfield Falcons’ offices at the MassMutual Center in the organization’s final days, a large, yet to be removed display in the lobby reads, “The road to the NHL passes through here.”

A star near the bottom of the display features a faceless hockey figure with a caption, “Your Name Here.”

While the reality of the franchise’s move is apparent with half-filled boxes strewn about the lobby, hallways and offices, evidence of the team’s once proud history and future promise is still prominent, making for an odd atmosphere.

Sitting in the Falcons’ conference room with Reminder Publications, Bruce Landon is the situation personified – a man simultaneously contemplating the past 22 years with an organization he helped build and the future prospects for Springfield hockey, all while surrounded by the evidence of the memories of which he speaks tucked into cardboard boxes.

The future of hockey in Springfield is in question; Landon’s is not. Approximately a week after the sale of the Falcons was announced, Landon said he is stepping away from the game and retiring.

“For me personally, this was a bit of a blow because this was my baby that I started 22 years ago with some people. Once you eliminate the emotional part of it from a personal standpoint, then it’s the concerns for people you are close to that have worked with you or for you for all these years who may be out of work,” he said. “There’s that wave of emotions and once that’s over, you start thinking about other opportunities that might be able to keep things going here.”

While the obstacles that lay in front of anyone wishing to bring a new team to the city are plentiful and obvious, Landon said he still believes hockey can work in Springfield, a market that posted the worst attendance in the league, in team history and one of the worst in Springfield hockey history.

In 1994 when he helped launch the Falcons as an expansion franchise, he did so with a business model that kept in mind that while entrenched in tradition and history, the Springfield market was not one that ever regularly brought in huge crowds.

It was a model he presented to former Springfield Indians Peter R. Cooney before he sold that franchise, a model he put into practice with the Falcons and one that he believes could work again.

It focused on managing expenses and expanding revenues in other areas such as corporate sponsorships and merchandising.

The Falcons’ heyday was the mid-1990s to the early 2000s. Attendance figures were some of the highest in the city’s history and business in other areas was robust. The franchise expanded its focus from providing hockey to offering a family experience. Screech became the first Springfield hockey mascot. A bevy of promotions and appearances from acts such as Claude the Happy Trumpeter, the Blues Brothers and the Dynamite Lady dotted the schedule. The team was recognized at one point by the AHL for its efforts in boosting group sales.

Things, however, took a turn during the second half of the Falcons’ existence, “for a lot of different reasons,” Landon said.

Attendance was one of them. No matter how many T-shirts get launched into the crowd or trumpeters hang upside down on the glass while tooting their horn, the hockey fan is still paramount in running a hockey franchise.

“Obviously you can’t sustain a franchise with 2,500 or 3,000 tickets,” Landon said. “[Former Falcons owner] Charlie [Pompea] always used the 4,000 mark and that’s his number; I believe if you control some of your other revenues and expenses, maybe it can be a little lower … But it has dropped off so dramatically over the last three or four years, can that number you need be reached again?”

Landon’s talent that separated him from other businessmen in sports was his ability to look at the fans beyond the ticket in their hand.

“We didn’t have a passionate fan base of say 3,000 people, but man, oh man, the fan base we did have was as passionate as any in the league,” he said.

Staff members would also tell you he recognized them as partners rather than employees.

“I love talking to people. I used to walk this concourse at least eight to 10 times every single game to talk to people,” he said. “I got to know every usher, every security guard, some concession people as well as fans. You get to hear them and you try to be open with them. That’s one of the things I will miss when retirement hits.”

While it appears Landon will not be actively involved if an AHL team relocates to Springfield, it doesn’t necessarily signal the end of the effort to prolong the hockey era for the city.

“I’m the face that everybody is turning to, but there are some other people working alongside me and behind the scenes to see what we can do,” he said. “The fans need to understand the challenges of getting a team here for the 2016-17 season are really difficult because of the way the league is structured now, but I’m trying to remain optimistic.”