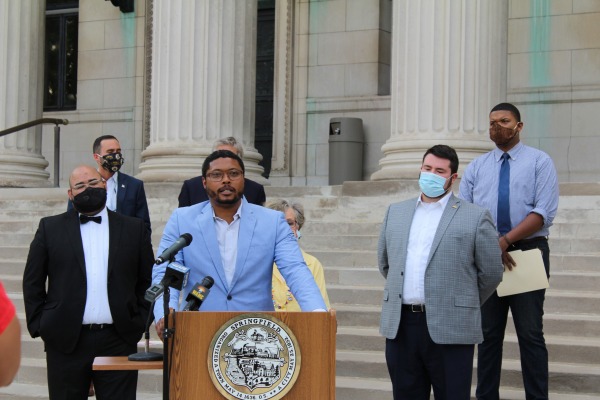 The Springfield City Council presented three resolutions and four recommendations during a press conference on June 9 in an effort to combat racial inequality in Springfield, in the Commonwealth and across the country.
Reminder Publishing photo by Danielle Eaton

SPRINGFIELD – On June 9, members of the Springfield City Council gathered on the steps of City Hall to announce new measures they would be taking to hold police accountable, not just in Springfield, but across the Commonwealth and the country.

Councilor Orlando Ramos began the press conference with an eight-minute and 45-second moment of silence in honor of George Floyd, a black man who was killed after a member of the Minneapolis Police Department knelt on his neck for nearly nine minutes. Floyd’s death caused an uprising of riots and protests across the country, calling for police departments in each state to be held accountable and violent policing to end.

Dozens of Springfield residents gathered on the steps of City Hall for the announcement by the council, some holding signs speaking out against police violence.

Ramos said the city council was standing before the residents because they had “heard you loud and clear.” The council, he said, was “here to demand change with you.”           Ramos then went on to provide four recommendations he was asking the Police Department to make. Included in the recommendations were the following:

Ramos called the current policy “ambiguous” during the press conference. In his letter of recommendations, Ramos said the Springfield Police Department’s (SPD) current use of force policy “makes no mention of the use of ‘choke holds, carotid restraints or any other neck restraints which put pressure to the neck, throat or windpipe that may inhibit breathing such as ‘knee to the back of the head.’”

Clarifying the explicit language used in the policy, Ramos said, is both “in the interest of clarity and common sense; and for the safety and protection of our residents; and legal protection of taxpayers of the City of Springfield.” The statement that should “be immediately added to the use of force policy,” he said, should be an outright ban of such holds including “chokeholds, carotid restraints and any other neck restraints that put pressure to the neck, throat or windpipe that may inhibit breathing.”

He added that should a chokehold be used by an officer after the language was added, he believed it should be a fireable offense.

While neither Mayor Domenic Sarno nor Police Commissioner Cheryl Clapprood was present at the press conference, the spokesperson for SPD, Ryan Walsh, told Reminder Publishing that some of the recommendations were already reflected in the current policies of the SPD. “The Springfield Police Department does not authorize or train officers to use choke holds or carotid restraints. Our Academy instructors place a significant emphasis on technique and keeping weight off of the head, neck and spine is stressed during all their hands-on training,” he said.

“We are also one of the leaders in de-escalation training being the first in the state to do it. It is already a part of each step of our use of force model in our policy,” Walsh added. “We believe our instructors teach and train in de-escalation more so than any other department in the Commonwealth. The commissioner has no issues using stronger language in the use of force policy to reflect this.”

In a statement to Reminder Publishing following the press conference, Sarno said, “I want to thank Councilor Ramos for being constructive, sensible and realistic. The commissioner and I are more than willing to work with him for the good of the people of the city of Springfield.”

He continued, and said many of Ramos’ recommendations were already in place, and cited specific training officers go through. “Many of the four recommendations being purposed, we already have in place. Our officers go through a series of educational training programs including EPIC (Ethical Policing is Courageous) Training to hold themselves and their fellow officers accountable for their actions, professionalism and integrity, and de-escalation training,” Sarno said.

He continued, “Our officers also do not train or utilize physical restraints such as choke holds or strangleholds. Their training avoids putting body-weight on areas of a subject such as the head, neck, throat and spine. Commissioner Clapprood and myself look forward to working with the city council on addressing and reviewing the language in our police policies and training programs and what new training and technology could improve better practices for the better of our residents and business community.”

Following Ramos’ recommendations for the SPD, Councilor Marcus Williams then introduced a resolution on which he is the lead sponsor, calling for the creation of a national registry of decertified police officers. Williams began the introduction of his resolution by sharing his experience of marching in several peaceful protests that had taken place in the city throughout recent weeks. He then went on to criticize the city’s response to the protests and said, “The city expected the worst, but got the best.”

He then went on to say that the time for learning had come and gone, and that now was the time for change. “Black and brown bodies are tired of being the teachable moment. When is the lesson going to be learned?” he questioned. The registry, he explained, would contribute to the “hiring [of] qualified, ethical police officers,” and “support and encourage the highest of standards” within police departments.

Council Vice President Adam Gomez then introduced a resolution for which he is the lead sponsor, which would declare racism a public health crisis in the city of Springfield. This resolution, he said, was necessary as the city council “recognizes that racism touches every aspect of our city.” Racism, he said, “stifles [the] potential of the city’s shared prosperity.”

He added, “We recognize the role the city council must play in eliminating racial disparity.” Gomez then gave examples of how racial disparities affected the lives of black residents within the city, including their wealth, physical and mental health and education. Councilors Michael Fenton and Timothy Allen introduced the final resolution of which they were the lead sponsors on, favoring the state certification for police officers.

Fenton began first by recognizing and expressing his pride of the diversity of the city council. Allen then began his comments by stating that he “couldn’t help but thinking about lying on the sidewalk not getting breath.” He said, “All people need to breathe in any way possible,” whether that be physically, emotionally or spiritually. The certification, he said, would give “authority to issue and revoke licenses” should that be needed. Allen cited 44 other states, not including Rhode Island, New York or Massachusetts, that currently have state licensing certifications for police.

Fenton, who is also a lawyer, said the resolution was “near and dear” to his heart as “hundreds of occupations require licenses to protect the people” and “all professions are required to conduct themselves professionally.” He emphasized that “everyone should want this,” and the implementation of state certifications would be “good for the good cops, and good to weed out the bad cops.”

Councilors Jesse Lederman, Malo Brown, Victor Davilia, Kateri Walsh, Tracye Whitfield and Springfield City Council President Justin Hurst then each spoke in support of the recommendations and resolutions presented. Brown gave powerful examples of racism and racial inequality he had experienced firsthand throughout life, and said it was time for change.

“I grew up in an era where Martin Luther King Jr. had a dream, we still have a dream. I’m sick of marching, where are we going? We have demands, we’ve been waiting too long,” he said. “I’m sick and tired of being sick and tired.”

Whitfield said she was encouraged by seeing citizens of all backgrounds, races and ethnicities come together. Something, she said, “you don’t see that if you sit on your couch in your house.” She then went on to address Sarno, who she said used “over policing” and “scare tactics” to discourage attendance of peaceful protests. She emphasized that she, and Hurst, who helped organize and was in attendance at the protest in East Forest Park, “wouldn’t put people at risk.”

Hurst echoed much of what was said by other councilors, but said the people of Springfield “have had enough, are tired [and] can’t breathe.” He said the problem with the march in East Forest Park was not that Sarno was worried about it becoming violent, but “the problem was we were marching in Ward 7.” Ward 7, Hurst explained, continually has high voter turnout numbers each year. “It’s not enough to sign a pledge,” he said, referencing Sarno’s signing of an Obama-era pledge banning the use of eight policies related to the use of force in policing.

One resident asked that the councilors help educate residents on what defunding the police would truly mean, as the argument has caused fear for many. Another resident, Teinya Freedom, questioned when the police presence within schools would end.

“The school to prison pipeline, what are you going to do? We don’t want to deal with what comes with police anymore,” she said. Freedom then said she was “prepared to pull my kids out of school if the cops don’t come out.” Gomez said he, too, had been a victim of the school to prison pipeline and understood how Freedom was feeling, however, the city council had no authority over those contracts.

Lederman then addressed the topic of a civilian police oversight committee, which he said had been passed by the city council twice and two separate vetoes had also been overridden. Despite the actions of the council, however, Lederman said the board had still not been created. “The mayor needs to follow the law and create the board,” he said.

Closing remarks by the councilors called for activist groups to band together and work together for a common cause, to vote and to continue to contact legislators and ensure the work was being done. The council is expected to vote on each of the three resolutions during their regular June 22 meeting.

On Tuesday, June 16, Sarno announced several measures his administration was taking to combat racism within the city. Look for more information on Sarno’s announcement in the June 25 edition of the Chicopee Herald.