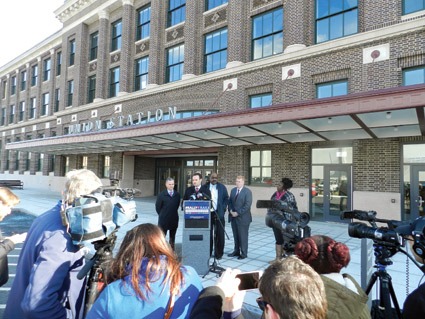 SPRINGFIELD – State Sen. James Welch and state Reps. Bud Williams and Brian Ashe joined their colleague state Sen. Eric Lesser in appealing to the public to show their support for the funding of a state report that would investigate the feasibility of an east-west rail link.

Lesser announced on Jan. 29 that MassDOT has placed the study as a second tier project on the draft of the 2018 rail plan. Lesser explained the plan is an assessment of the Commonwealth’s rail assets outside of Boston and is written about every 10 years.

“This is a major, major breakthrough,” Lesser said.

The draft is currently open for public comment until Feb. 19. The plan will be updated accordingly.

There are projects listed in the plan as Tier One and Tier Two. Lesser explained the Tier One projects are “shovel ready,” while Tier Two proposals need additional development work.

Two rail projects are listed on Tier One: additional New Haven to Springfield service which would be coordinated between Amtrak and the state of Connecticut commuter rail and Springfield to Greenfield passenger service, which would be “dependent on pilot program, which is a near-term priority.” Both of those projects are listed as having high benefits and feasibility.

The study for east-west passenger rail has a classification of “to be determined” under the benefits and feasibility and has the note “challenges associated with line ownership and freight conflicts; prerequisite investments.”

Lesser tied economic development and east-west rail together and which he said would unite the western region with “the red hot economies to the east and south.”

Increases in Amtrak serves in the north-south corridor and the start of commuter rail linking Springfield to Hartford, and New Haven CT starting in May is part of the solution, Lesser said.

Welch promised the delegation “will continue to bring [the study] to the forefront.” He added a transportation plan should be completed for the entire state.

All of the legislators urged the public to comment to support the study, who can submit statements of support by emailing them to Planning@dot.state.ma.us or calling 857-368-9800.

To read the full report, go to https://www.mass.gov/service-details/rail-plan.