Lesser says Commonwealth must be ‘deliberate’ in planning sports betting 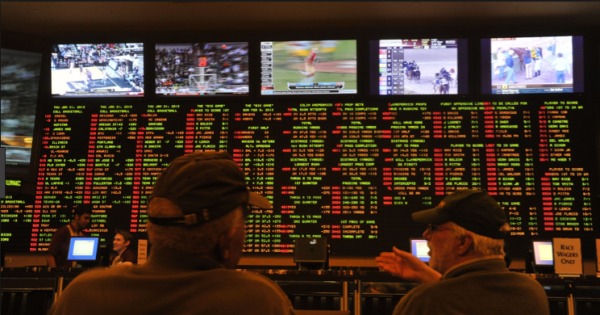 SPRINGFIELD – State Sen. Eric Lesser said there must be a “threshold conversation” about whether or not the residents of the Commonwealth want sports betting to be part of the gambling landscape here.

“We don’t have to do anything,” he said.  Lesser spoke about the subject on “Government Matters” on Focus Springfield with this reporter.

The Supreme Court decision earlier has allowed states to take up the subject.  Lesser said that if people want sports betting there are many different ways it could be regulated.

Lesser said that as far as models for legislation and implementation, Nevada has had sports betting the longest, while Delaware and New Jersey has been the quickest in setting up sports betting since the Supreme Court decision.

Connecticut and Rhode Island are “fairly far along in getting something passed,” Lesser added. Some European countries have had sports betting as well, which could also provide models for a system in Massachusetts.

“The good thing about Massachusetts right now is we don’t have to rush. We want to be deliberate about the process,” he said.

The Massachusetts Gaming Commission has done much research so far on sports betting, Lesser said, and he urged that the issue of gaming addiction has to be considered.

Integrity of sports is another issue.

“The reason people watch games is you don’t know what the outcome will be and we want to be sure if you start pumping all of this new money and attention into sports games that you maintain that sense of excitement and the sense it’s not fixed. That’s obviously very, very important,” he said.

He said residents in his district have expressed concerned about the proper management of sports betting. He added that many people see sports betting as something happening already whether it’s March Madness brackets in a workplace, betting on a offshore website, traveling to states where that is already legal or doing in on the black market.

People have told Lesser they would like to see it “brought out of the shadows” taxed and properly managed.

By the end of the next session, two years from now, Lesser believes the Commonwealth will have a better sense of how sports betting fit into the gaming landscape.

Lesser had attended a meeting convened by the Massachusetts Cultural Council prior to the interview. Lesser said that tourism arts and culture has been an overlooked aspect of the area’s economy.

Lesser explained there is research that shows that for every dollar spent in direct support of the arts, there is a return of $7. The reason is that arts and cultural activities are “uniquely local attractions, uniquely local assets, they can’t be outsourced.”

Collaboration between the city’s and the region’s tourism and cultural attractions is important, lesser noted.

“It’s all about coordination,” he said.

He predicted, “the casino will be successful if it works on activating all of the spaces around it, pushing the visitors who are coming in to experience the gaming facility, who then can go out and visit the local restaurants, visit the museums, go visit the symphony, go visit the Thunderbirds games at the convention center. That’s really the key.”

To make that happen, transportation to the city has to be “figured out,” he said. Rail service is essential, he said as demonstrated by the fact the greatest number of Uber trips have been between the casino and Union Station.

He supported the idea of regional cross marketing, so visitors to one of the area’s attractions would visit more.