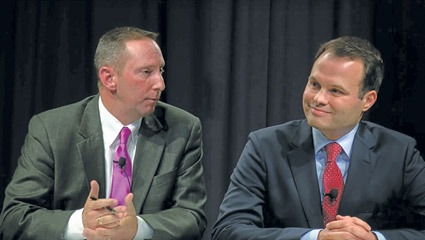 The two candidates met to debate the issues of the senate campaign for the First Hampden and Hampshire District on a broadcast produced by Focus Springfield on Oct. 10.

The district includes parts of Springfield and Chicopee as well as Granby, East Longmeadow, Hampden, Longmeadow, Wilbraham, Belchertown and Ludlow.

This is a rematch of sorts for the two men as Lesser and Harrington ran against each other in the Democratic primary two years ago for the seat. Lesser won and Harrington said he realized his values aligned with Gov. Charlie Baker and joined the Republican Party.

After answering questions posed by Shannon Young of The Republican, Matt Szafranski of Western Massachusetts Politics and Insight and this reporter, the two candidates spoke directly to one another.

In an effort to test his commitment to the district, Harrington asked Lesser directly if Congressman Richard Neal leaves office if Lesser would run for his seat.

In the rebuttal Harrington asserted that Lesser pays $3,500 a month to ForeSee Partners, a firm that is “heavily involved in Congressional candidates.”

Harrington added, “You as the voters deserve to know what his ambitions are.”

Harrington charged that 70 percent of the Lesser’s campaign contributions come out of the district.

While Lesser thanked Harrington for making a statement not supporting Republican Presidential candidate Donald Trump in light of the revelation of his comments about women, he asked him if he is willing to no longer use campaign resources and information shared by Trump and his campaign.

Harrington replied the resources are national Republican funds, and not necessarily Trump’s.

Harrington called Trump “a disgusting person” and said he is writing in Baker’s name for president.

Harrington noted Lesser’s support of former Secretary of State Hillary Clinton and asked him, “Should I hold you responsible for her emails or Benghazi?”

Lesser acknowledged that “Hillary is not perfect,” but added he was supporting her.

Harrington questioned why Lesser had missed a hearing of the Veterans Affairs Committee and instead attended an event at the Basketball Hall of Fame that was conducted for Israeli officials.

Lesser said the visit was part of a broader effort to encourage Israeli business investments in the Commonwealth and noted how he had been part of the effort to establish a direct commercial air link between Boston and Israel.

Lesser added there are 9,000 people employed by Israeli businesses all in the eastern part of the state and the goal was to show what Western Massachusetts had to offer for future investments.

Lesser then defended his involvement with veterans by noting his father, a physician, joined the reserves at age 57 when he learned of a shortage of doctors in the military and served in Afghanistan.

He also spoke of legislation on which he worked, including supporting the Holyoke Soldiers Home.

Both men agreed on the importance of the arts. Lesser asked Harrington about his commitment to supports arts and cultural development and Harrington revealed that initially when he attended college he was a theater major.

“I would absolutely encourage the arts program in all the communities,” Harrington said.

Harrington then asked Lesser about his lack of support of an effort to obtain more state funding for the Hampden County District Attorney’s Office. Harrington wanted to know why Lesser had instead worked to get a study on commuter rail between Springfield and Worcester passed.

“It’s completely not true I didn’t work on this issue,” Lesser said. He then explained there has been a “historic disparity” in funding the DA’s office here than in the eastern part of the state. He then joined state Sens. James Welch and Donald Humason in an effort to address this lack of funding.

Lesser explained how the budgeting process works is the House goes first then – sometimes a month after – the Senate addresses an issue. In that time, projections get adjusted and the proposed expenditure becomes “a bit of a moving target.”

In between the actions of the two bodies, the revenue projections went down, Lesser explained and there was an amendment brought to the floor of the Senate for the funding. The funding was ultimately, despite the efforts of the delegation, not included in the final version of the budget.

Lesser said the delegation then tried to get the funding into the budget through the conference committee but because the revenue projections had declined the DA’s budget was level funded.

Harrington insisted Lesser should have diverted any funds for his rail study into the DA’s budget.

To watch the complete debate, go to http://livestream.com/focusspringfield/senatedebate2016/videos/138475492.