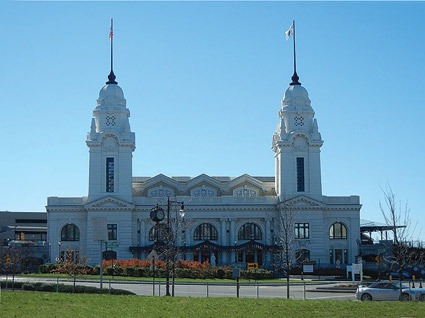 SPRINGFIELD – The establishment of high-speed rail service from Springfield to Boston is more about the construction of a strong political argument than driving spikes and laying track, according to state Sen. Eric Lesser.

Lesser spoke to a group of approximately 50 people – most of them seniors who waxed poetic of train travel through Springfield in the past – at the Sixteen Acres Branch Library on Nov. 16 and explained the issue was more than anything a fight for fair distribution of tax dollars for infrastructure investments in the state.

Lesser explained rail lines extending from Springfield to Boston already exist, but are currently owned by CSX, a freight company who sees the line as a lucrative avenue that supplies Boston Harbor, among other eastern Massachusetts economic engines.

A purchase of the right of way for the 55 miles of track – similar to what the Deval Patrick Administration did to establish better commuter rail service from Worcester to Boston with 14 trains daily – would cost between $150 to $350 million, according to early estimates, Lesser said.

While the state has balked at that price thus far, Lesser pointed out legislators are not unwilling to spend more money elsewhere.

“That’s a lot of money; no one is going to say that’s not a lot of money, but it’s well worth the investment,” Lesser said. “They are about to spend $1 billion – that’s billion with a B – on a four-mile extension of the [Massachusetts Bay Transit Authority] Green Line in Somerville connecting Lechmere [Station] to Tufts University. We all love Somerville, we’re not knocking them, but what we need to do in this state is have a little bit of conversation about priorities and how we spread investments and benefits in an equitable way.”

The state has already seen the ill effects of the current lack of investment equality, Lesser said, explaining that while overall the state has seen a quick recovery from the recession, when the greater Boston area is removed, the remaining counties have experienced economic decline, which is causing an exodus.

“Hampden County is one of the only counties in Massachusetts that is losing population,” Lesser said, “More of our young people are moving out than are moving in. We need to do something significant, and frankly very dramatic to reverse this tide that we’ve seen.”

The current proposal for east-west rail service calls for trains traveling at speeds of up to 90 miles per hour with stops at Boston’s South Station, Framingham, Worcester, Palmer and Springfield’s Union Station, which will be completed next year.

Amtrak’s southern route from Boston to New York through Providence, RI, and New Haven, CT, is at capacity. That route, Lesser said, is the most traveled in the country. In order to expand the line, the government would have to acquire land and property, including residential homes. The alternative would be an inland route through Springfield.

Union Station, he said, would be the “node” for that route. Eight new trains a day are expected to arrive in Springfield from New Haven and Hartford with the opening of Union Station and the plan also includes eight trains traveling from Springfield to Boston daily.

Lesser encouraged those in attendance to speak out in favor of expanded rail service not only to local officials and legislators, but also to members of the community. Residents in the audience began passing a pen and paper in order to create a list to establish car pools to the State House to support the effort.

Multiple representatives from Palmer who were in the audience expressed the need for rail service in their community and stressed that if the project was to be taken seriously, a collaborative effort would be needed and their group, which has established a petition, would be willing to work with Springfield residents.

“We need to think of Western Massachusetts as a community as a whole in order to make this happen,” Palmer Town Councilor Donald Blais said.

Freight will never go away, and it will always delay passenger service. Can parallel tracks be built in the existing right of way so there is no conflict, instead of purchasing the freight line?

Springfield also needs to think about ways in which it can be more of a destination. I believe it lacks the kinds of attractions that will lure people to visit and live there. That can change.