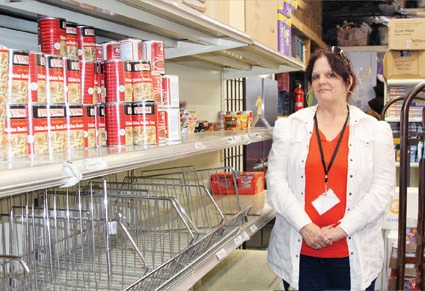 Michelle Levrault, assistant director of the Community Survival Center, stands before a shelf in the pantry that she hopes will be filled with contributions from the food drive.
Reminder Publications photo by G. Michael Dobbs.

INDIAN ORCHARD – Last year, residents of Wilbraham, Indian Orchard and Ludlow contributed more than 20,000 pounds of food items that helped their neighbors and this year The Community Survival Center hopes the generosity will be repeated.

On May 12, residents can leave bags of non-perishable food items by their mail boxes that will be picked up by members of the National Association of Letter Carriers and volunteers from the center.

The center’s assistant director, Michelle Levrault, explained to Reminder Publications the center has been participating in the drive for more than 20 years and relies on the donations to serve their clients through the summer.

“It is very important for the simple fact that summer means people are concentrating in vacations not thinking about bringing food to a food pantry,” she said.

The May food drive brings in enough food to carry the center until the first week of September, she said.
The ideal contributions for the drive are protein items, Levrault said. These would include canned meats, soups, stews and corned beef hash, among other items.

Levrault noted that items such as boxes of pasta and cereal – while accepted – could be damaged if the weather is rainy on the day of the drive. If a boxed item becomes wet, it must be thrown away.

Perishable items such as bread cannot be accepted.

She also asked if people could look at the sell-by date on a food items. Often times outdated items are contributed, of which must be disposed.

Some people have also donated homemade items such as jams and jellies, but they cannot be accepted either.

Mary Cassidy, the executive director of the center, said studies have shown that people in food insecure situation are “more vulnerable to food borne illnesses.”

“Last year, we received over 20,000 pounds of food from the Letter Carriers drive. With everyone’s help, we hope to make that goal again this year,” Cassidy said.

The Emergency Food Pantry operated by The Community Survival Center – located at 240 Main St. – serves low-income households from Ludlow, Wilbraham, and Hampden, as well as the Indian Orchard, Sixteen Acres, and Pine Point neighborhoods. Low-income seniors from Hampden County are also served by the pantry. The center also has a thrift shop that sells donated clothing, and uses the proceeds to support the pantry and programs