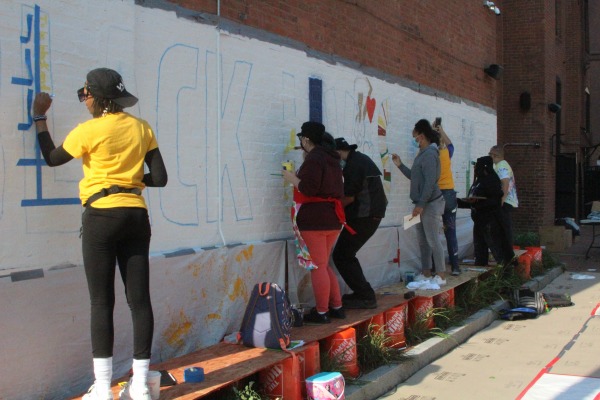 Artists from Springfield gathered on Oct. 10 to create a new Black Lives Matter mural on the side of the building at 232 Worthington St.
Reminder Publishing photos by G. Michael Dobbs

SPRINGFIELD – Artists gathered at 9 a.m. on Oct. 10 to produce what would be the third Black Lives Matter mural in downtown Springfield.

One of the organizers, City Councilor Tracye Whitfield, said the owner of the building at 232 Worthington St. offered the space for the new mural after several incidences of vandalism of the one painted on Court Street in front of City Hall.

That mural, which was authorized by the city, replaced an unauthorized one that was in front of the Old First Church.

Whitfield explained the design of the newest mural was left up to the artists who were each given a letter in the phrase “Black Lives Matter.”

The organizing group released the following statement about the new mural, “On Sept. 12, a Black Lives Matter mural was painted by over 100 community members on Court Street in Springfield, Massachusetts. Since that time, the mural has been repeatedly defaced, and vandals have even been caught on camera doing so. In the absence of effective steps taken by the city to prevent continued vandalism of the mural, the Springfield Black Lives Matter Mural Community Coalition will continue to push back until the powers that be step up and align their actions with their words. It is not enough to wear the shirt that affirms Black lives as our mayor has done before, and not call attention loud and clear to the public that these defacings will not be tolerated. The creation of this new mural is a direct response to the vandalism we are seeing repeatedly occur.”

There is a crowdsourcing effort to fund the mural. Go to https://www.gofundme.com/f/nhkrc-black-lives-matter-mural.