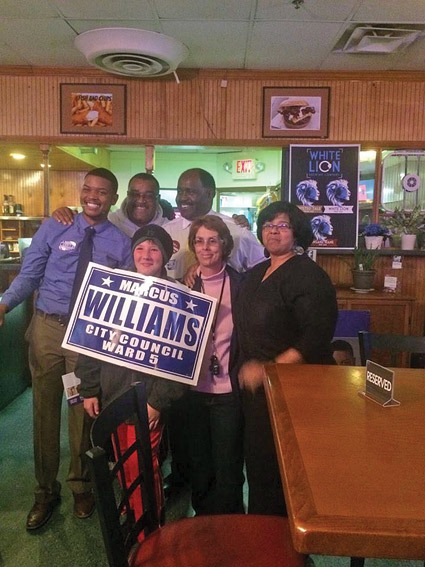 SPRINGFIELD – The biggest upset in the city’s election cycle this year was all about the people.

That’s the message Marcus Williams had for Reminder Publications as he celebrated his convincing victory over incumbent Ward 5 City Councilor Clodo Concepcion at Sophia’s Pizza and Sports Bar on election night.

Williams, a 26-year-old lifelong resident, said a campaign predicated on getting out on the streets and hearing the concerns of his would-be constituents was the key to a stunning victory in which he won more than 61 percent of the vote.

“The message was clear that it was time for some new leadership on the council and tonight the people definitely let that be known,” he added.

Williams, a contracts and grants coordinator at the YWCA in Springfield, grew up in Pine Point and attended Springfield schools, graduating from the High School of Commerce. After earning a bachelor’s degree from Boston College in 2012, he returned to the city and now resides in Sixteen Acres.

Williams emphasized the personal connections he established would not end with his campaign and he would carry the conversations he had with residents into the City Council chambers.

“You hear people’s concerns on a daily basis and I learned to form my platform on what the citizens have to say,” he said. “There are legitimate issues and concerns and you have to take those and focus them in a way so that you can incorporate that message into what you are saying.”

Locally, safety issues were among the most common, specifically regarding traffic and speeding in the vicinity of school zones, Williams said, but in Pine Point, a greater worry superseded all.

“There were concerns among Pine Point residents about how they are not feeling represented,” he said. “I kind of hit home for them that Pine Point deserves a councilman who acknowledges their presence.”

Williams also identified the large senior citizen population in his ward as one with which he would like to conduct more outreach to better understand their needs, concerns and what programming they would like to see in the future.

On a larger scale, Williams identified the ongoing MGM Springfield project as an issue he would make a priority. He specifically expressed concerns over recent changes to the project, including the reduction of 14 percent of the square footage without notifying the city.

“I definitely want to be part of that process of holding MGM, and projects like MGM, accountable for their lack of transparency,” he said.

While Concepcion’s bid for a fourth term fell flat, he likely will remain heavily involved in issues within the ward as president of the Sixteen Acres Civic Association. Williams said he looked forward to working together with his opponent.

“I would hope Mr. Concepcion would be willing to work with me. He had done good work for the ward and I would hope to continue in that same line,” he said. “I would like to work beside him and seek some of his advice dealing with the issues of residents of Sixteen Acres, specifically.”