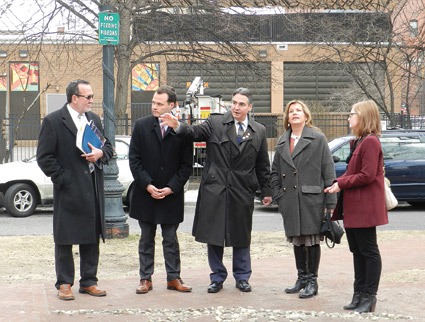 The Cultural District is about a third of a square mile in downtown Springfield and includes the Central Library, the Springfield Museums, the Community Music School, CityStage, Symphony Hall as well as restaurants and other businesses.

Walker said prior to the tour she had been briefed on the upcoming Dr. Seuss Museum and called districts such as Springfield’s “incredibly important.”

Speaking of the economic impact, she said, “This is an investment that gives you a return.”

There are 32 cultural districts around the Commonwealth, she said and added that is more than any other states.

The advantage to such district is to bring “a community together around a common agenda” that includes marketing and programming, Walker explained.

Lesser said the tour was to illustrate to Walker that ‘Springfield is ready for its close-up.” The Cultural District could strengthen the “tourism ecosystem.”

The senator explained a healthy cultural component to a community is a “magnet” for technology related businesses.

The group walked to Stearns Square, then to WFCR, the Community Music School and Symphony Hall.