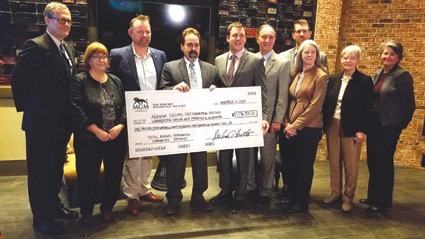 The communities receive their base amount annually with a 2.5 percent annual escalator through the expiration on MGM’s initial Gaming License.

The funding has been used for public safety and traffic infrastructure improvements.

Seth Stratton,vice president and general counsel at the casino, noted that he was part of the negotiation teams seven years ago crafting these agreements, something he said was “a pleasure but sometimes challenging.”

He admitted some discussions with local elected officials were “contentious.” He noted there was a “fear of the unknown.” Stratton added he’s pleased the worst fears held by some never came to fruition.

The requirement that Massachusetts put in place for casinos to create Host Community Agreements not just with a city in which a casino is located but also with adjoining communities was “certainly a hurdle,” Stratton said.

He added, “The Legislature and the Gaming Commission had some good forethought in putting this unique process in place.”

Stratton said that as part of the agreements currently a “look back” study has started to make sure the agreements are working and to ascertain the impact made on the communities by the casino.

Gaming Commissioner Bruce Stebbins underscored the importance of keeping the line of communications open between the communities and MGM Springfield. He added the commission has an ombudsman whose responsibility is to work with the communities that have agreements with MGM.

Stebbins said the communities have not applied for additional remediation funds, which means there have not been the negative impact some people predicted.

Agawam Mayor William Sapelli said the relationship between Agawam and MGM has been “very positive.” He added, “Any issue we’ve had, they’ve addressed.”

The principal concerns prior to the casino’s opening, he noted, was increased crime and traffic congestion. He said although traffic has increased it has been manageable and crime is not a “major issue.”

The casino has created jobs for Agawam residents, he added.

Longmeadow Select Board Chair Marie Angelides said that the community was concerned about traffic on U.S. Route 5 and emergency management on Interstate 91. The funding Longmeadow has received has gone to prepare for improvements to Route 5.

Stratton said the new VIP lounge where the event took place – formerly the Starbucks location  in the casino  – is an example of how the company evaluates what it is doing and makes the changes appropriate for its audience.

“We’ve only been open a year but we’re thinking about what we could do better,” he added.