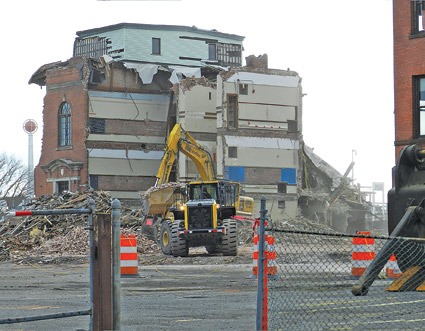 SPRINGFIELD – With bone-rattling winds and frigid temperatures the announced walk-though the MGM Springfield casino site to show off the progress made so far to city officials and others was switched to a bus tour of the three-block site in the city’s South End neighborhood.

The message though was the same: Progress is being made.

The tour on Jan. 19 was scheduled to take place prior to the site plan review on Jan. 19 and 20 being undertaken by the City Council. There will be two additional hearings on Jan. 25 and 26 at 5:30 p.m. Council President Michael Fenton, one of the officials who took the tour, told reporters the council wasn’t “going to be rushed in making an decision.”

Although tentatively the vote on the site plan – what is needed for MGM to actually start building – is scheduled for Jan. 26, Fenton said if additional hearings were necessary for the process, he would set them.

When asked what his most pressing concerns are, Fenton said the controversial design switch of the hotel and the transfer of the market rate apartments from the casino site itself to other locations in the city.

He said, “I am looking forward to the hearings. A lot of questions are expected to get answers.”

He said he was “really confident” the City Council will approve the site plan so construction activities will start.

After the school comes down, the next step will be building a road through the site in order to transport the former First Spiritual Church building on Bliss Street to its new location. Work on constructing the parking garage is also one of the early goals on the site, Mathis added.

While he acknowledged the possible completion from the third Connecticut casino as well as casinos in the Albany, NY, area, he discounted the idea those proposed businesses were making an impact on the construction schooled.

“We’d be doing this as quickly as possible, anyway,” he said.

Mathis noted MGM Springfield would be a “destination resort,” something he does not believe the Connecticut casino would be.