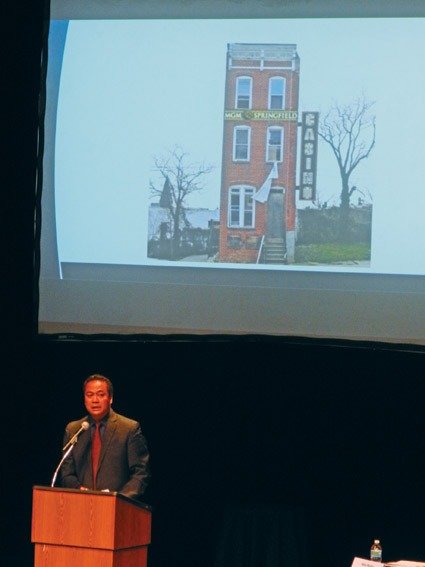 MGM Springfield President Michael Mathis speaks of the changes to the MGM casino project in Springfield at his presentation on Nov. 18.
Reminder Publications photo by G. Michael Dobbs

SPRINGFIELD – At the start of the public meeting on Nov. 18 between Springfield officials and the management of MGM Springfield to discuss the proposed changes in the casino project, there was several moments of levity.

MGM Springfield President Michael Mathis displayed a photo familiar to many attending at CityStage: a small ramshackle brick building with a sign identifying it as MGM Springfield.

This was heavily circulated on Facebook as a reaction to the news that MGM was decreasing the size of the project and eliminating the tower hotel.

Mathis credited radio personality John O’Brien with using this photo as part of his criticism concerning the changes. There was laughter from the capacity audience.

It was clearly an effort to spread a message of humility and accessibility as well as collaboration after several months of serious communication missteps, which raised questions and ire from Mayor Domenic Sarno and members of the City Council.

Before the presentation Mathis also asked the audience for a round of applause for Sarno upon his re-election. In clearly a jest noting the close relationship between MGM and the mayor, Mathis joked, “Seventy-seven percent, [the margin of Sarno’s win], give us a little credit for that.”

Clearly, although, there was an effort to re-establish a relationship, the audience was there for more than just flirting. This was MGM’s opportunity to show the company is still committed to the project the people of Springfield accepted.

William Hornbuckle, president of MGM Resorts International, said the company’s “journey” started in 2012 and changes to a project are part of it.

“That’s [changes] not uncommon to get something of this scale and scope in play,” he said.

Hornbuckle emphasized MGM has spent more than $200 million so far in Springfield.

“One thing you can count on in the development businesses is that time costs money,” he said.

Hornbuckle said the casino would be built with union labor as well as the 54 apartments that will be constructed outside of the campus. Members of building trade unions filled the audience.

He said while the economy would ultimately dictate the number of permanent jobs he believes the oft-quoted figure of 3,000 jobs is “sustainable.”

He then revealed the original budget figure of $750 million would be in reality $950 million. That number drew applause.

“While I appreciate the applause I can assure you they are not applauding me in the board room,” Hornbuckle said.

He showed a concept drawing of a casino with a high-rise hotel and asked the audience to guess what casino this really represents. It turned out it was the Bellagio on the strip in Las Vegas, which does not have a tower hotel.

“The notion of change in our industry is common and constant,” Hornbuckle said.

Hornbuckle said the reported 14 percent decrease in square footage of the project was really less than 10 percent and came from the moving of the apartments from the casino campus; the elimination of staircases, elevators and other design elements in the tower hotel; changes in the design of the loading dock; decreasing the size of the employee dining room to the same scale as casinos of similar number of employees in Las Vegas; and reducing the number of lanes in the bowling alley from 15 to 10 lanes.

Hornbuckle also noted the “back of the house” operations, such as human resources, would be in the existing building at 95 State St.

The result is Springfield MGM will be the most expensive construction project in the state, he said.

Albie Colotto, art and design director of Friedmutter Group, the architects of the Springfield casino, and Mathis went over a list of what has changed and not changed in the project.

In the Host Community Agreement (HCA) the amount of retail was listed as 27,982 square feet. It has now been increased to 31,250 square feet and moved to different locations within the campus. More of the retail will be on Main Street where as before it was located on Union Street.

MGM officials declined to say which retailers are interested in coming to Springfield at this time because leases have not yet been finalized.

The restaurant and food service space has increased from the HCA figure of 72,750 square feet to 73,107 square feet. The banquet area has also been decreased by less than 2,000 square feet due to efficiencies.

The childcare center for employees has been increased from 3,000 to 6,000 square feet. There will be an ice skating rink, which is not in the HCA, and there remains a $1 million commitment to help redevelop Riverfront Park.

The parking has decreased from not more than 3,600 spots in the HCA to the current 3,375 garage spaces and 86 surface spaces. In times of greater parking demand, employees will use other lots in the downtown area and shuttled to the casino.

There remains a $7 million commitment from MGM to the Union Station redevelopment and a continued plan to bring one major entertainment event a month to the MassMutual Center.

Kimball Goluska, the president of the Chicago Consultants Studio Inc., who has been a consultant for the city about the casino project, said from the city’s analysis MGM’s commitments as defined by the HCA “remain intact.”

He added, “Generally the changes are positive.”