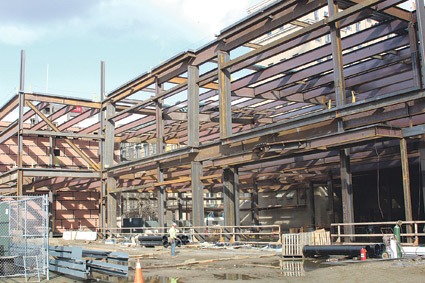 The steel frame for the casino area has been largely erected.
Reminder Publications photo by G. Michael Dobbs

SPRINGFIELD – MGM Springfield President Michael Mathis told members of the Massachusetts Gaming Commission, elected officials and members of the press the completion date for the nearly $1 billion casino project is still the fall of 2018.

“We feel really good about that date,” he said. Mathis added in the spring the company will be speaking to tenants about the opening date.

Mathis made his remarks at the conclusion of a tour of the construction site on Dec. 1.

Mathis said the construction crew has been working to finish the pouring of concrete before the weather turns too cold for that activity. At the same time steel framing has been erected so work on the buildings can continue through the winter, he explained.

The chair of the Gaming Commission, Stephen Crosby, said that after looking for three to four years at renderings, getting the “physical flavor [of the project] is extraordinary.”

Other “loose ends,” Crosby said include the market rates apartments that are part of the project.

He views the gaming, retail, entertainment and housing aspects of the development as a “mixed use project … it’s really, really unique.”

Three sets of visitors toured the site with Jason Rosewell, the executive director of design and construction for MGM, leading the group of which this reporter was part.

Rosewell said that a little less of the 3,000-plus space garage has been completed at this point as we walked around the “podium” – the name MGM uses for the floor of the casino.

Dominating the site’s landscape is the crane that is 205 feet tall. So heavy is the vehicle it rests on a platform of thick wooden planks – “rail road ties on steroids,” Rosewell described them – to prevent the weight of the crane from damaging the concrete base.

At the rear of 101 State Street the six-story hotel is going up. Rosewell explained the steel frame is being erected and at the same time the floors are being installed. Construction curtains shelter a battery of heaters used to keep the curing concrete on the floors at 40 degrees.

The building at 95 State Street is being designated as the site of the “back of the house” operations – accounting, human resources, etc. – Rosewell noted. The two skyways connecting 95 State Street to 101 State Street have been removed, he added.

The building at 101 State Street will be used for third party tenants, Rosewell said.

On average there are currently anywhere from 175 to 225 construction workers on the site daily, he said.

Former Springfield City Councilor and now Gaming Commissioner Bruce Stebbins said the amount of work accomplished since his last visit is “incredible.” He added the amount of challenges for the commission is based on how the Commonwealth will handle on-line gaming as it would appear that is how Millennials prefer to gamble.