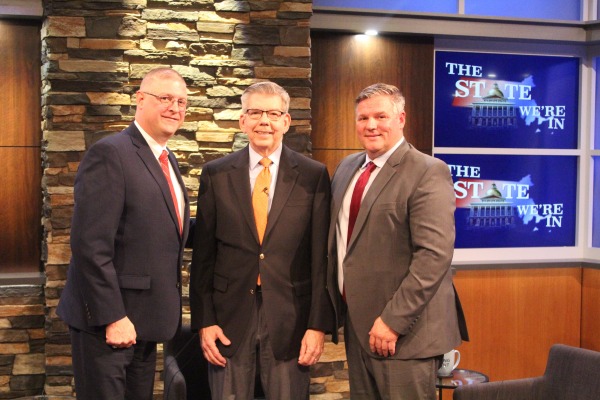 The debate, part of “The State We’re In” on WGBY, was moderated by Ray Hershel and was taped on Oct. 10. Hershel allowed a controlled give and take between the two candidates in the half hour debate.

When asked about the most pressing problem facing Chicopee, Vieau said that revitalizing the downtown was his priority. He noted Chicopee is participating in the MassDevelopment Trans Development Initiative (TDI), which will allow Gateway Cities to apply for grants to enhance local arts and culture infrastructure.

He said with the new apartments in the downtown there would 1,000 new residents to the neighborhood.

Vieau said the city has never had such an opportunity before and with grant money as well a private investments, the redevelopment could be “worth millions if done right.”

Morissette also spoke about    downtown, but included it in an answer that focused on crime issues in the city – not just downtown but around the community. He said “job one” for him would be to address why the city is “losing cops” through a poor contract.

Vieau responded that he has the “utmost faith in the police department” and called cases of crime “isolated incidences.” He would implement 24/7 walking beats in downtown, if elected, and would consider renting space for a more visible police presence.

Morissette responded that he disagreed with Vieau and that the problems presented by crime can’t be addressed until the retention of police officers is solved.

Hershel then asked Morissette about the controversy presented on social media by former student Timothy Vadnais. In an hour long video posted on YouTube, Vadnais charged that while a student five years ago, Morissette outed him during a disciplinary session by leaving an intercom in his office on, broadcasting to the entire school. Morissette allegedly used the “f-word” in the incident.

With the release of the video, the Morissette campaign issued a written response but Morissette had not spoken publicly about it.

Morissette said that while he “couldn’t go to specifics,” he said that when the student was brought into his office the telephone was off the rack, allowing part of what was said to be broadcast. In his written statement he said, “Although no pertinent information was made public during that conversation, the student, and parents were informed, and I accepted responsibility for the error.”

During the debate, Morissette asserted, “ Everything else in the video is completely wrong.”

Vieau did not speak of the incidence in the rebuttal time, but instead spoke of his 21 years of service to the city. “The city of Chicopee need someone of experience to move the city forward,” he said.

“I may be new to politics, but I’m not new to leadership,” he said.

Hershel continued to ask questions about the Chicopee Comp incident and said that some people would question the timing of the video’s release as a political gesture.

“I can’t imagine anything else,” Morissette. He added, “There was nothing hidden” and expressed feeling sorry for Vadnais.

In reaction, Vieau noted he had promised to run a “very transparent campaign” and has “always put the people of Chicopee first.”

In speaking about legislation that would give more funding for education to Chicopee and other communities across the Commonwealth and how it would be spent, Vieau said he was looking forward to working with the new school superintendent  “who has a lot of great ideas.”

Morissette said he is considering how the new funding would benefit the classroom and said the district is losing teachers due to contract issues. He also said that teachers are buying their own supplies.

Vieau noted Chicopee was the first Gateway City to put air conditioning in middle and elementary schools. He said he was very proud of the city’s educational system and that many teachers are happy with the system. In a question about downtown redevelopment, the two men disagreed again. Morissette said the way to attract new businesses would be to make downtown safe again. He called for collaboration with business leaders to develop a plan to market downtown to new businesses.

Vieau repeated how the new residential units, plus the TDI grant has resulted in a “really exciting time” for economic development.

Morissette said he couldn’t emphasize enough the need to “clean up” the downtown.

Vieau countered that he feels very safe while downtown and he has chosen to put his campaign headquarters downtown.

The future of trash disposal in the city was another topic of contention between the two candidates. Vieau said the current system, which includes a pay-as-you-go paid bag option, “has been working.” He added a goal for the city would be to a zero waste status through additional recycling.

Morissette charged that city officials have only been addressing the trash issue since the closing of the landfill used by the city. He said the current system is “not fair to large families who are having a tough time buying those bags.”

Vieau responded by noting the idea the city is only now dealing with the issue of trash is “untrue.” He added, “We’ve spent a lot of time looking at ways to decrease the waste stream.”