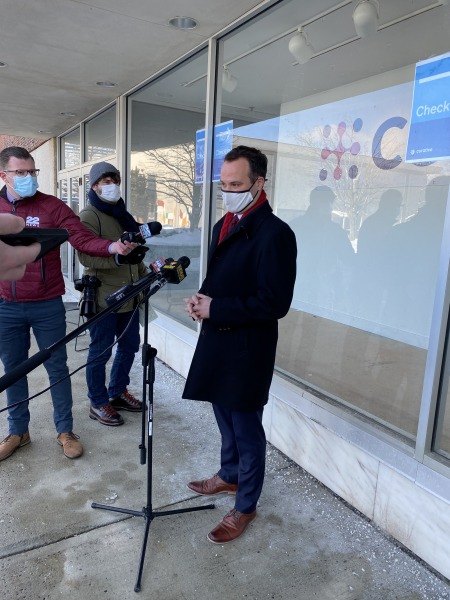 SPRINGFIELD – The state-run vaccination center at the former Macy's building at the Eastfield Mall was the subject of several significant changes and visits last week, showing the evolution of vaccination services in the commonwealth.

The issue of making seniors over the age of 75 – the first group of the general public to be eligible for the inoculation – stand outside in the cold for their appointments was addressed by Mayor Domenic Sarno.

Sarno said on Feb. 9, "It is time to take the bull by the horns.  Although I am very thankful to Governor Baker and Lt. Governor Polito for their partnership and commitment to Springfield and Western Massachusetts by placing this mass vaccination site in our city.  The operational logistics by Curative [the company administering the vaccinations at the site] must improve.  Commissioner Clapprood and I have directed our dedicated Springfield Police Department (SPD) units to the Eastfield Mall to tell Curative to get our seniors and those individuals waiting in line for their vaccination to go inside and out of the cold.  SPD will work with the National Guard, who the governor and lt. governor have recently dispatched to provide assistance, to assure that our beloved seniors are taken care of and are not waiting outside in the cold weather and that they are reassured that they will not lose their place in line."

The people with appointments now can wait in the mall.

On Feb. 10, state Sen. Eric Lesser toured the vaccination center and then met with the press.   He credited Sarno for getting the mall and Curative to allow seniors to wait inside.

"Moving forward it does seem they [Curative] got the message," Lesser said.

While Lesser said the health staff is "all doing their job" at the site, he was critical of the state's online procedure to get an appointment.

Calling it "an obstacle course," Lesser noted there was no option for talking to someone to answer questions on the site and the website was only in English.

"People should be outraged. The website needs to be more streamlined," he added. He has been "inundated with calls from constituents" about the problems at the site.

Lesser has co-sponsored a bill that would create mobile vaccination units to bring the vaccine to areas far from the state-centers.

He added, "Some of the worst fears of inequity with the vaccine are coming true."

The Eastfield Mall remains the only state-vaccination center for the four western counties. Lesser said he would continue to monitor what is happening

The state also decided that those accompanying seniors to the sites can receive the inoculation as well.

Matt Murphy of the State House News Service reported, "In an effort to make the COVID-19 vaccine more accessible to residents 75 and older, the Baker administration plans to begin this week allowing anyone who accompanies an eligible senior to one of the state's mass vaccination sites to receive a shot themselves.

"Health and Human Services Secretary Marylou Sudders said the new accommodation for trusted family, friends, neighbors or caregivers to get vaccinated along with vulnerable seniors came after consultation with councils on aging and other advocated for older adults.

"While all the mass vaccination sites are handicap accessible, sites like Gillette Stadium or Fenway Park can be unfamiliar and intimidating to some, and allowing trusted companions to also get vaccinated is an effort to encourage more seniors to seek the inoculation."

Baystate Health released the following statement: "Massachusetts announced a new state policy allowing COVID-19 vaccinations for younger companions who accompany seniors age 75 and older. The announcement has led to some confusion for those now seeking to book companion appointments. This new policy does not apply to Baystate Health vaccine sites and only applies to state-run vaccine sites, the closest of which in our community is at Eastfield Mall in Springfield."

Baker toured the vaccination site at the Eastfield Mall on Feb. 13. He defended the new companion vaccination package and noted those over 75 years of age who wish to speak with someone about making an appointment should call 2-1-1.

The governor said he is not starting the next wave of vaccinations for those 65 and older until more people in the first wave receive the shot.

State House News also reported, "As of Friday afternoon [Feb. 12], Massachusetts had officially surpassed 1 million doses administered. The Department of Public Health [DPH] reported that the state has received a cumulative 1,503,925 doses of the vaccine since the rollout began and gotten 1,034,018 into arms, a rate of nearly 69 percent.