Murren apologizes for lack of communication about MGM changes 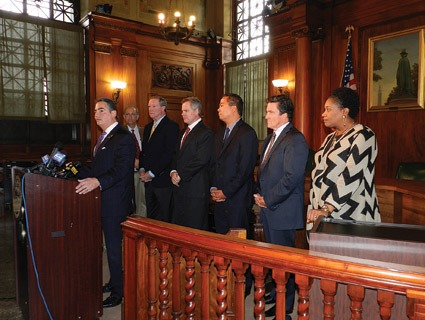 SPRINGFIELD – After meeting for an hour with Mayor Domenic Sarno, MGM Resorts International Chairman and CEO James Murren said he was sorry for the lack of communication between the casino company and the city concerning changes to the plans for MGM Springfield.

MGM will make a public presentation in Springfield concerning the changes at a meeting on Nov. 16 prior to a meeting of the Massachusetts Gaming Commission.

Murren said there might be additional changes to the project “but they will be minor.”

Murren said the creation of a real estate investment trust called MGM Growth Partners, which was announced on Oct. 29 as well, would not affect the Springfield casino. The company offered a draft registration state to the Securities and Exchange Commission as a first step to offer the sale of stock in the new entity.

The new company will be assuming about $4 billion of MGM Resort’s debt.

Murren said he will be the CEO of the new company and its creation offers flexibility for the company. In a press release he said,

Murren added at the press conference that MGM Resorts would run the operations of the properties regardless of which entity owns them.

Sarno said the group had a “frank discussion” the covered “all of the issues that have occurred.” Those issues included the announcement the project will be reduced 14 percent in structural size, a development MGM did not tell city officials directly, but was learned through the release of a report to the Commonwealth.

Murren said the lack of communication “was not the company’s style.” He added the company has spent $200 million so far on the casino and intends to spend more than the $800 million that has been announced in the past.

“I’m sorry that there was confusion,” Murren said. “It was not intentional.”

He then compared the casino project to the Monarch Place building – where the new MGM offices are being constructed – and said the casino was twice the size. It is four times the size as the Basketball Hall of Fame he added. He called the project “more complicated” than either of those developments and added it is a “an epic and groundbreaking effort.”

Murren defend the elimination of the tower hotel and said, “I firmly believe it is an improvement.”

He believes the six-story hotel, which will put people onto Main Street, is a better choice.

“It [the tower] wasn’t going to fully deploy the energy I was looking for,” he added.

Murren promised to come back to Springfield more often and that the Springfield casino “will pack a lot of punch.”