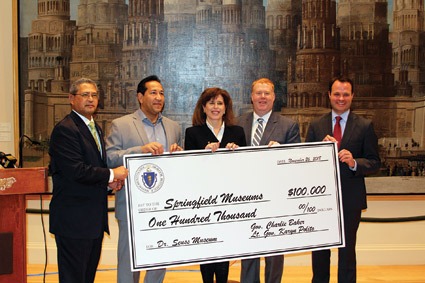 SPRINGFIELD – The Amazing World of Dr. Seuss Museum – the first and only museum dedicated to author and Springfield native Theodor Seuss Geisel – will be expanding its bilingual interactive exhibits in an effort to make the museum more accessible to the city’s diverse population.

On Nov. 26, area legislators joined museum officials at the Michele and Donald D’Amour Museum of Fine Arts to announce the state funding secured in the Fiscal Year 2019 budget to support the Dr. Seuss museum.

The $100,000 allocation will be used to ensure that the museum’s exhibits are bilingual, allowing the community and tourists alike to enjoy the museum. The funds are an earmark from the budget tied specifically to Massachusetts Marketing Partnership/Massachusetts Office of Travel & Tourism.

“I think most of our legislative delegation knows that this museum [the Amazing World of Dr. Seuss Museum] has turned out to be a role model for how important museums are to cultural tourism,” said Simpson. “Dr. Seuss is well known for being the advocate for kids learning how to read, and I think many of you know that kids struggle with reading and that reading is really critical to academic success in our schools. So, having this funding to have the bilingual interpretation expanded in the Dr. Seuss museum is absolutely critical and essential to helping us meet our mission.”

Lesser was the first of the legislators to take the podium.

He touched on the museum’s role in the city’s economic revitalization, as well as the critical need for making art accessible to everyone.

“There’s really two elements in this that I think are very important to get across. The Dr. Seuss visitor numbers are through the charts. These visitors bring their dollars, they visit our restaurants, they go to our shops, they expose themselves to everything happening in Springfield – and the hope is that they come back to Springfield for future visits to the Hall of Fame, or to the new MGM complex, or our local restaurants and art galleries,” said Lesser. “Investing in our local cultural aspects is really, very important.

“I also just want to point out a social justice and civil rights element to this funding, which is to promote the bilingual access of this museum. Dr. Seuss is one of the greatest literary icons of children’s literature and has motivated and inspired millions of kids to learn how to read. We need to make sure everyone has access to the inspiration and to the story of Dr. Seuss, and that means full bilingual access,” he continued.

Welch echoed Lesser’s points on the economic benefits of investing in the museum, saying he believes it is at the top of the list – along with MGM Springfield – as far as cultural attractions go.

The senator also added that bilingual translations of literature have been done to great works for centuries.

González stressed the need to accommodate and reflect the city’s diverse population, citing that 75 to 80 percent of its residents are Hispanic.

“I want to concentrate on the word ‘bilingual.’ When you walk into a school system in the city of Springfield today, 75 or 80 percent of those kids are Hispanic and the demographics have drastically changed in the last 10 years,” he said. “In the future, 8-year-olds in 10 years are going to be 18-year-olds, and in 20, they’ll be parents and they’ll be visiting the museums. That invitation that you [President Simpson] are making speaks volumes today.”

Tosado added to González’s notion that access to education for everyone is crucial to the overall success of the city.

As a Springfield native, Tosado expressed education is “very” important to him and that he believes it is a “great equalizer.”

“I think whatever success I’ve achieved has been from my love of reading,” he stated.

The Amazing World of Dr. Seuss Museum is the newest museum on the Quadrangle at the Springfield Museums. Since its inception in June 2017, the Museums have doubled attendance and had an economic impact of more than $16 million for the city of Springfield.

The Springfield Museums are located at 21 Edwards St. in downtown Springfield. The consortium of museums includes the Springfield Science Museum, the Michele and Donald D’Amour Museum of Fine Arts, the Lyman and Merrie Wood Museum of Springfield History, the George Walter Vincent Smith Art Museum, the Dr. Seuss National Memorial Sculpture Garden and The Amazing World of Dr. Seuss Museum.

For more information about the Amazing World of Dr. Seuss Museum, head over to https://springfieldmuseums.org/about/dr-seuss-museum/.