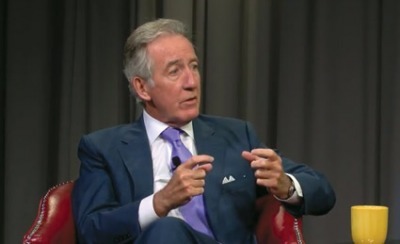 WASHINGTON D.C. – Congressman Richard Neal has been in the forefront of the Democratic reaction to the tax reform plan that has been announced by the Republican leadership in Congress.

Neal is the ranking Democrat on the House Way and Means Committee.

According to a summary of the 429-page long House bill:
•Seven individual tax brackets would be reduced to four brackets – 12 percent, 25 percent, 35 percent, and the current top rate of 39.6 percent remaining in place for the very wealthy.
• Corporate taxes would drop from 35 percent to 20 percent permanently.
• Standard deduction would increase from $6,350 to $12,000 for individuals and from $12,700 to $24,000 for married couples.
• Child tax credit would expand from $1,000 to $1,600.
• Federal deductions for state and local income and sales taxes would be eliminated, but local property taxes would be deductible up to $10,000.
• No changes to limits on 401(k) pretax contributions.
• Alternative minimum tax would be repealed.

On Nov. 1, Neal appeared with Nancy Pelosi and Sen. Chuck Schumer with their reactions to the proposal in a press event that was streamed live.

“What they give you on one hand they take away from another,” Pelosi said. She accused the tax plan would add “trillions to the deficit” and eliminate Medicare and Medicaid.

Schumer said, “We’re still pouring through the fine print.” but he added “many, many middle class families” would see their taxes increase.

He charged the Republicans want to rush the bill through without hearings and without experts examining it.

“This bill is like a fish. If it stays out in the sunlight for too long, it stinks. They don’t want that to happen,” Schumer said.

“This is a missed opportunity,” Neal said. He noted that in 1986, the last time there was major tax legislation, there were 30 hearings before the Houses Ways and Means Committee, 12 hearings before subcommittees, 450 witnesses testified and revisions took 26 days.

As of Nov. 1, Neal said he and his colleagues have not seen any details other than what was distributed at a press conference.         He said, for instance, the bill may be giving tax breaks to middle class families, but those decreases are matched with increases such as slashing the ability of people to write off the interest they pay on student loans.

“This is anything but the simplification of the tax code,” Neal asserted.

He went into greater detail on one aspect of the proposal with the release of a statement later that day: “Today we heard reports of a cap on retirement savings in 401(k) plans that would be outlined in the GOP tax reform proposal. This is simply a bad idea. America is in a crisis. Few people save enough to live comfortably for the years after they stop working. One vehicle for saving for retirement that people do use is their 401(k) plan. Reports on the GOP tax reform proposal, however, indicate that there would be a cap as to how much money individuals are able to contribute to their plan on a pre-tax basis. This cap scheme would harm Americans’ ability to prepare for retirement by providing less of an incentive to save and decreasing small business’ incentive to sponsor retirement plans. Taxing workers retirement savings now with a promise of tax savings in 40 years only worsens our nation’s retirement crisis. The Republicans are phasing out savings to pay for a tax cut for the people at the top. Democrats are trying to make it easier for people to plan for their future.

Neal followed up on Nov. 2 with another statement:  “I have been around Congress long enough to know that bad process usually leads to terrible policy. This Republican tax bill is no different. A rushed, partisan and secret process yielded over 400 pages of broken promises to middle-class families. This bill falls short of reform, falls short of middle-class tax relief and falls short of the fiscal principles to which Republicans have long held themselves. Months of secret negotiations have produced a plan that tilts the tax code farther from the middle-class and more towards the well-off and well-connected. Their plan slashes taxes for big corporations and those at the top by gutting important deductions and tax incentives that every middle-class family in America relies on. Republicans have raided the very deductions and credits that help millions of families afford everything from groceries to medical expenses to a college education, just to give more to those who don’t need it and haven’t asked for it. For generations, the American dream was built on the promise that if you worked hard and played by the rules you could buy a home, raise a family and save for a secure retirement. Republicans have rolled out a bill today that makes homeownership more expensive, education more costly and needed medical care unaffordable. Republicans had every opportunity to work with Democrats on a bipartisan plan that would have provided real reform for real people. Instead, they chose a path of secrecy and partisanship that excluded Democrats and many of their own members. Democrats will work in the coming weeks to expose the true cost this bill will have on middle-class families, small businesses and innovators.”

On Nov. 7, Neal participated in another press conference after the Ways and Means committee began its discussions of the bill.

He charged the proposed legislation takes away many of the stimulus effects of tax policy such as New Market Tax Credits and Historic Tax Credits. He said the elimination of state and local tax credits affects 32 percent of his constituents.

He asserted there is “simply no evidence” the middle class is going to enjoy “broad base tax relief” when one goes through the document.