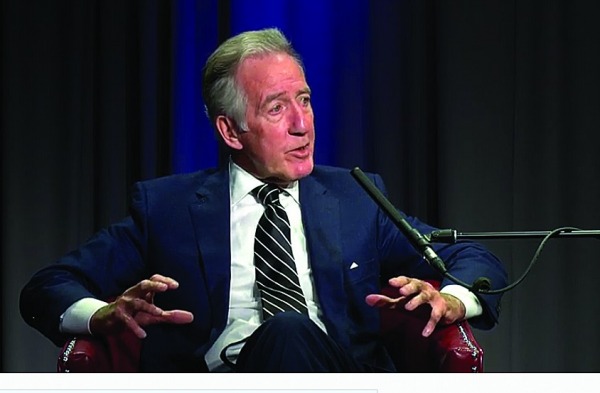 SPRINGFIELD –The way Congressman Richard Neal, chairman of the House Ways and Means Committee, sees it, the three most urgent problems facing the nation should be tackled at the same time.

Neal spoke to Reminder Publishing and Focus Springfield in a new edition of the “Government Matters” television program on Nov. 13.

Neal said, “There’s a broad consensus that addressing the pandemic in a Biden Administration is going to be priority number one and number two is linking that to the economic recovery. But how best to do that?”

His idea is to try to link the whole idea of stimulus, pandemic relief and climate change simultaneously.

He added, “There’s plenty of opportunity for people of temperament to understand how the flow of legislations work and address these three issues is important.”

Neal said the nation needs another round of stimulus legislation now. The Heroes Act, passed by the House earlier this year with a price of $3.4 trillion, has been stalled in the Senate.

House Speaker Nancy Pelosi, Neal explained, has said she would compromise to lower the amount to $2 trillion and such legislation would offer relief now in the period before President-elect Joe Biden takes the oath of office. The move would allow Biden to devise his own plan once he takes office in January, 2021, Neal explained.

When asked if people in government are still talking to one another about additional pandemic relief, Neal replied, “Everybody is talking, it’s just what voices we can rely on. I think there’s a distinction that needs to be drawn there.”

Neal had been in regular contact with Secretary of the Treasury Steven Mnuchin in helping to negotiate the CARES Act, but he said there is “a lull at White House as the president continues to focus on the legitimacy of the election, which I think is a terrible miscalculation on his part. There is no evidence of wide-spread fraud and the most you’re going to do is turn around a few hundred votes which could go to Biden as well as to Trump and I think the election has been settled.”

He contended, “The closer we get to Inaugural Day we’d all be better off if the president would say let’s address the pandemic in this short period of time. Let’s talk about a short-term stimulus package and then congratulate Joe Biden and allow the next president of the United States, the 46th president, to make a determination.”

Neal said his committee is considering legislation that would allow those individuals who opted to delay paying payroll deductions under a program initiated by the Trump Administration to pay those taxes back over time.

He had opposed the Trump tax cuts as he said the cuts favored the wealthy over the middle class. He added he supports an extension of the earned income tax credit to single filers to help people.

Neal added he and others are waiting to see who will be the next Secretary of the Treasury.

Commenting on this year’s presidential election, he noted that in 1960, Richard Nixon did not ask for recounts in several states, despite the fact his most ardent supporters wanted him to do so. Instead, Nixon believed that conceding would be the best thing for the nation. Neal added the controversy in Florida in the Bush/Gore race was not about fraud, but rather the method in which votes were cast – “the hanging chads” – and then accurately reading the results.

“What President Trump has to do here is to draft this sort of argument that there’s been an illegitimate victory for Joe Biden. There’s no evidence to support that,” Neal said.

While there is no Constitutionally-mandated requirement for a concession speech, Neal noted, “but it goes a long way to establishing creditability for the successor.”

He added, “We are not well served in a period where both sides are so charged up and coupled with the fact there is so much misinformation circulated about the election results.”

While the balance in power in the Senate may not be determined yet for weeks due to a run-off race in Georgia, Neal said the Democrats should still control the House although there are still 14 seats to be determined.

The election results from Western Massachusetts showed that in Hampshire, Franklin and Berkshire counties between 25 and 26 percent of the electorate voted for Trump. In Hampden County, Trump support at 40.2 percent. Neal offered an explanation about the differences between the results in the four counties.

He said, “I think the discourse that permeates the political conversation in America is hyper-charged, that’s part of the problem. But the accuracy of the final numbers of a reminder here. Four years ago, Donald Trump won East Longmeadow. He won Wilbraham. He won Agawam, Southwick. He won Hampden. This time around with the exceptions of Southwick and Agawam, Joe Biden won and the point I would like with pundits, who by the way have never won an election … in Springfield you’d be hard-pressed to find a Republican [but] Charlie Baker won it by 2,600 votes. The last time a Republican gubernatorial candidate won Springfield was Frank Hatch against Ed King [1978]. That goes back a few years. These voting patterns are locked in over a long period of time. Hampden County is not Middlesex County. Hampden County is not Franklin County nor it is Hampshire County. There is a different sub-set of voters who live in Hampden County. They tend to be moderates overwhelmingly on both sides. Now there is a hard left and a hard right, but not nearly as many in the numbers you would find in other parts of the state.”

Speaking about the two political sides of this country coming together to address problems, Neal recalled some of the words spoken by President Abraham Lincoln in his second inaugural address in 1865.

“Lincoln looked out to a nation where 2 percent of the population had died, almost 700,000 people – wounds that are still there today and he said ‘With malice toward none and charity for all.’ So, I think the words of a president go a long way toward national healing. Let me say Joe Biden and I share a commonality, a respect for the institution for governance. I understand clearly the rhythms of government but I also note that reassurance is what we need to offer to the American people: we’re up to the task, we know how to do it. We know how to place amendments. We know how to get big legislation done.”

To watch the complete interview, go to https://www.youtube.com
/watch?v=ZtifcAykUUs&feature=youtu.b.