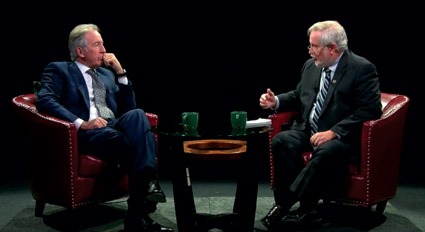 SPRINGFIELD – Congressman Richard Neal believes that in today’s political atmosphere “outrage prevents us from having earnest, sincere conversations with the goal being let’s get a solution.”

Neal said the government shutdown was due at last in part to “issues that were put in place that were guaranteed to excite the masses.”

Neal spoke to Reminder Publications during “Government Matters” television program produced by Focus Springfield on Jan 26. Neal noted the government must come to terms with the government shutdown that has to be resolved by Feb. 8

One of those issues was the resolution of a pathway to citizenship for the “Dreamers,” which Neal said was exacerbated by statements made by President Donald Trump.

He believes the DACA issue could have been settled “amicably,” but it is an example of an issue that was “tossed into the mainstream to generate an aggressive result by the other side and the result is a stalemate.”

What complicates matters is the government is well within the present fiscal year without a budget, Neal added.

Neal stated it would be difficult to predict what will happen on Feb. 8 because of the conflicting positions the president has taken on DACA. While the members of the House interested in resolving the issue are eager to hear what the president will propose, what Neal believes should actually happen is comprehensive immigration reform.

The congressman noted the number of Mexicans nationals in the United States illegally has decreased and the illegal immigration is coming from Central American countries.

Neal explained what people may not realize is “the biggest problem is those who come on a visa and don’t come home.”

There has been a slowdown in the citizenship process that he said is due to the increased vetting due to the 9/11 attacks.

When asked if he knows what Trump is looking for in terms of an immigration solution, Neal replied,

“What the president is looking for is pretty elusive from day to day.”  He said the situation is that Trump makes a statement and then members of his staff “walk him back on it.”

When asked if there are stories and issues in the House that deserve greater coverage in the media, but are not getting coverage because they are not part of the current news cycle, Neal said there are those issues and one is climate change,        “It’s not a hoax. There are some legitimate arguments about how it’s generated, but none-the-less I think that encourages us to seek renewable energy options,” he said.

Improvement to Medicare is another issue not getting the attention it deserves. “There’s $50 million a year in fraud in Medicare,” he explained.

Pension planning is another subject that is not getting its due. “Half of the people who get up every day and go to work are not in a qualified pension plan,” Neal noted. Social Security, with an average annual benefit of “just short of $16,000,” is not designed to be a principal retirement fund and Neal has been working on a variety of pension issues.

Speaking of the 24-hour news cycle that can be steered in a different direction by a tweet from the president, Neal said, “It’s very hard to solve problems if you can’t reach a consensus in terms of describing what the very nature of the problem is because that is fact-based.”

As the ranking Democrat on the Ways and Means Committee, Neal is acknowledged as a tax expert in Congress and he prefaced remarks about the recent tax reform legislation with a statement he made with a laugh: “It’s the biggest tax cut in history, except that it isn’t.”

Neal believes the bonus money would have been better used by “building it into the base, a permanent feature into the individual’s income.”

Neal believes the current political scene is in “some measure a reflection of the fact that for 12 years we’ve had downward pressure on wages in America. People have not had any wage growth. Even now going forward there’s going to be a question about wage growth. And part of this is in the aftermath of the recession, which by the way we were losing 800,000 jobs a month, part of the problem was as employers became used to accomplishing the same end with fewer employees there was less incentive after the end of the recession to go back to the previous levels of employment.”

He acknowledged that many factors have gone into affecting American employment, including technology, the skills gap – six million jobs go unfilled, Neal noted – the gig economy and greater concentration of wealth in America.

The country would be better served to have a conversation about these issues than “the charged rhetoric that leans us to stalemate.”

To watch the complete interview go to www.youtube.com/watch?v=zkoiQ5A8NrY&feature=youtu.be

“Half of the people who get up every day and go to work are not in a qualified pension plan,” Neal noted. And a major reason for this is that Neal voted to help kill pension plans back when George W. Bush was president with these two key votes:

Comprehensive Retirement Security and Pension Reform Act. This vote was on a motion to recommit with instructions. This proposal was to further protect workers’ assets when their company changes from a “defined-benefit” pension plan to a “cash-balance” plan. Workers in defined-benefit plans contribute a set percentage of their pay over many years to a pension fund and usually know in advance the value of their expected pension checks. But a growing number of companies were switching from defined-benefit to cash-balance plans, which, in effect, give workers a lump-sum payment of accrued assets. Critics said these conversions significantly devalue the pension. The amendment rejected by this vote sought to force companies to keep defined-benefit plans afloat for already-enrolled workers. H.R. 10, 153Y-276N, 5/2/01, Roll call 95. Neal voted: No

Pension Security Act of 2003. This bill provided employees with more leeway to manage defined-contribution pension plans such as 401(k) plans. Employees could sell the company stock in their pension plans three years after a contribution was made. Over five years, they could sell all company stock acquired in retirement plans before the bill’s enactment. Employers would be required to provide employees quarterly statements about their pension plans, and could provide them with access to professional investment advice, provided the adviser disclosed fees and potential conflicts of interest. A “yes” vote was in support of President Bush's position. H.R. 1000, 271Y-157N, 5/14/03, Roll call 189. Neal voted: Yes (Neal was the only member of the Massachusetts delegation to vote yes).

So for Neal to ride in on his white horse now as some kind of savior of pensions and retirement security is a bunch of crap.