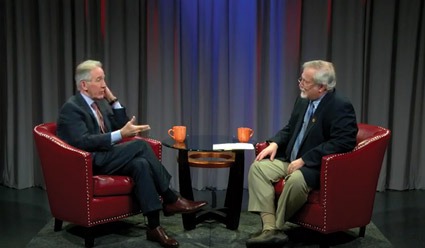 Congressman Richard Neal spoke about what he will work on as chair of the House Ways and Means Committee in a conversation with Reminder Publishing Managing Editor G. Michael Dobbs produced by Focus Springfield.
Reminder Publishing photo

SPRINGFIELD – Consider the responsibilities for the House Ways and Means Committee: it has jurisdiction over “taxes, trade, tariff, management of the public debt, pensions, welfare, Social Security, Medicare and a small slice of Medicaid,” Congressman Richard E. Neal explained.

“It generally has been at the center of most of the major issues that the Congress has confronted during the course of the last two centuries,” he added.

Neal has long been a member of the 40-person committee and now he is the chair of it. He spoke with Reminder Publishing and Focus Springfield about his agenda in an interview on Jan. 7. Neal brings to his chairmanship a number of priorities, including infrastructure improvement; preserving the Affordable Care Act provision of protecting people with pre-existing conditions; and strengthening pensions.

With infrastructure, Neal noted that China has invested more in its infrastructure, as has European nations, than the United States. Neal said that when he first came to the house, public works bills were the easiest of legislation to get passed.

It’s not just roads and bridges, Neal said, but also water systems and broadband that require improvements as well. The Trump Administration has indicated that it wishes to invest more than $1.5 trillion in infrastructure with the Ways and Means Committee overseeing those funds.

Neal believes that since President Donald Trump campaigned on the issue of infrastructure improvements there should be forward movement on the issue.

“It’s begging for investment and returns,” he said. Neal added, “State governments and local governments are not in a position to do this on their own. The formula, by and large since Mr. Eisenhower signed the federal highway act with the help of two other individuals, one named Lyndon Johnson who was the majority leader in the Senate and Sam Rayburn, who was speaker of the House, it was done in a bipartisan vein. The federal highway system was the envy of the world and now that’s begun to age out.”

“Item number one,” though, is protecting the pre-existing condition clause of the Affordable Care Act and Neal intends to hold hearings about it in the next several weeks.

“Why should a child born with diabetes never be able to secure health insurance? Or if they do, have the problem of being rated?” Neal asked.

Despite criticisms and challenges, Neal asserted the Affordable Care Act has been working across the country.

“We intend to enshrine the ban on the preexisting conditions,” he said.

“Despite the scorn conservatives have heaped upon the Affordable Care Act, most of it has worked as it was intended to,” he added.

On strengthening retirement plans, Neal noted, “Half of the people who get up and go to work every single day are not in a qualified retirement plan. The average Social Security benefit is $16,000, that’s a little bit north of $325 a week.”

The retirement system was supposed to be based on three factors, Neal said, personal savings, a qualified retirement plan and Social Security.

“There’s no immediate problem with Social Security, Neal said. “It’s got a pretty good lifeline ahead of it.”

He believes the government needs to make it easier for people to set aside money for their own retirement. Neal explained that after the 2008 recession, many employers stopped contributing to their employees’ retirement accounts. Steps need to be taken to encourage employers to do so and to discourage people from borrowing from their retirement plans before retirement.

Watch the entire interview on the Reminder Publishing Facebook page at www.facebook.com/ReminderPublications.