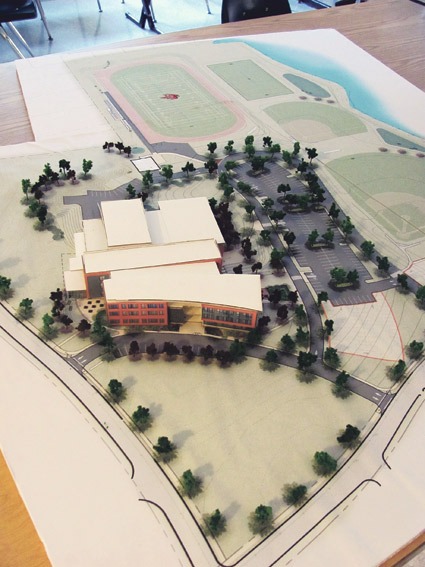 SPRINGFIELD – Thirty-five people, including City Council members Bud Williams and Tim Allen attended an Aug. 23 meeting in the cafeteria of St. Michael’s Academy on Wheeler Street, anxious to hear the latest update on construction of Pope Francis High School, planned for the site of the former Cathedral High School on Surrey Road.

“The purpose of this meeting is to have you hear from Fontaine Bros., the construction company, talk about the schedule of the project, hear any concerns you may have as neighbors, [tell you] what will happen during construction, what will be going on, what you can expect at certain times of the year, and then to answer any questions,” Dr. Paul Gagliarducci, executive director of the Pope Francis High School Project, explained.

He added the diocese wanted to “reach out” to the neighborhood “and let you know we want to be good neighbors for the two years of the project.”

Gagliarducci then introduced Construction Manager David Owen, indicated he would be the diocese’s onsite representative during construction, working out of a clearly marked trailer.

“If there is a problem, we would like you to go to David first; David would be the conduit for solving the problem,” he said.

Raimondi emphasized Fontaine Bros. understands there is always anxiety when a project of this magnitude begins in a residential area.

“We know when we come in that we are guests in your neighborhood,” Raimondi said, at one point producing an aerial shot of the tight quarters surrounding Chicopee Comprehensive High School, which Fontaine Bros. built 10 years ago within an existing residential neighborhood.

“Having lived [myself] in a development over the past six years where construction is going on,” Raimondi continued. “I’m well aware of those little irritations that construction can cause, and we will try to keep those to an absolute minimum.

“I want to assure you we have your best interest at heart,” he continued. “One thing we will do, if there is a problem, as Dr. Gagliarducci said, if you bring it to David’s attention, we will make sure it is addressed.”

Raimondi said Fontaine Bros. expects to begin working the site the second week of September, using the two existing entrances and a one-way site traffic pattern to lessen the impact on Surrey and Wendover roads. Concrete foundation work should begin in early October and continue until “winter doesn’t allow us to do that any longer,” he said. Structural steel work is planned from December through March.  He expects to begin enclosing the structure in April of 2017, with work continuing through the summer. “When the fall comes we will be ready to work on the inside of the building as winter progresses,” with the schedule ending when the school opens in 2018, Raimondi said.

He added the company anticipates planting the grass fields in the fall of 2017 so they “will have a full year to mature” and ready for student use.

Gagliarducci said Fontaine Bros. is creating a website where neighbors can monitor construction; with a link on the newly completed Pope Francis High School site, http://www.popefrancishigh.org/ under the "Our Future" section located on the homepage slider.

Raimondi indicated he expected work to take place at the site between 7 a.m. at 3:30 p.m.

During the question and answer period, attendees expressed concerns ranging from the condition of Surrey Road following the demolition of Cathedral High School to dust mitigation from existing debris piles to trash still clogging the pond on the construction site.

“I wish we had had a meeting like this before demolition by Costello construction,” said longtime Surrey Road resident John Megas, who added that project had his house shaking for nine months.

“Demolition and construction are two different animals,” Raimondi said. “You won’t experience the same headaches as you did during demolition.”

Addressing questions about the condition of the pond, Raimondi said Fontaine Bros. had nothing in their contract regarding the pond, but they would be taking before and after samples to gauge construction impact.

Gaglariducci noted questions about the pond had surfaced at a previous neighborhood meeting, and he brought those concerns back to the diocese at that time. Owen said additional pond cleaning was recently completed and an environmental assessment was submitted to FEMA, with the dioceses now awaiting results.

City Councilor Tim Allen asked if FEMA had specific requirements regarding pond cleanup. Owen said the diocese had followed recent instructions regarding debris uncovered by drought conditions, and that he expected FEMA’s response to the assessment in “six to eight weeks.”

Following the meeting, Allen told Reminder Publications the neighborhood was “thrilled” that the school construction project was “coming to fruition.”