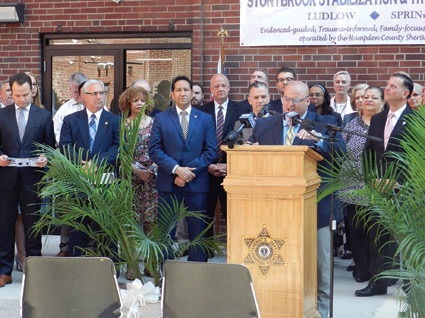 SPRINGFIELD – Hampden County Sheriff Nick Cocchi will open within 60 days new treatment beds for non-offending individuals who have been committed to an addiction program under Chapter 35.

Cocchi made the announcement on May 30 at the Western Recovery & Wellness Center in Springfield.

“We are transforming a housing unit in our Ludlow facility. The Stonybrook Stabilization & Treatment center of Ludlow will be a comprehensive detox and stabilization program separate from those incarcerated for criminal activity,” he said.

There will be 54 treatment beds in Ludlow, he explained, as well as 32 beds that are in the Springfield facility.

“Between the two sites there is 86, let me repeat that, 86 new beds online here in Western Massachusetts dedicated to the treatment of substance abuse disorders,” Cocchi told the nearly 100 people gathered for the announcement.

Currently people who are admitted to treatment under Chapter 35 from Western Massachusetts must go to a facility in Plymouth. Sheriff Christopher Donelan of Franklin County and Sheriff Thomas Bowler of Berkshire County both spoke of the hardships on families from their counties when a loved one is committed to the Plymouth facility.

Cocchi emphasized the new treatment facility is a partnership between his department, other sheriff’s departments and private health organizations.

For Ludlow Selectman William Rooney, the announcement was personal. He described how a year ago he sat in a courtroom with his nephew who was seeking treatment under Chapter 35. Noting that his nephew would receive treatment in Plymouth he said, “It just didn’t seemed to make any sense.”

He praised Cocchi and his staff for brining the treatment programs to Western Massachusetts.

Cocchi explained he has several objectives for the next year. He intends to go to the legislative delegation after a year to show them the progress of the program and to ask them for allocated resources in the next state budget.

Currently, Cocchi is creating this program out of his existing budget and facilities.

“Eighty-five beds is just a start. It’s not enough,” Cocchi said of the facility. He noted that according to the Commonwealth’s Department of Health there were 1,874 deaths due to opioid-related overdoses.

He is also lobbying the delegation to change Chapter 35. Under the present law women cannot receive treatment as the law forbids women to be committed to a correctional institution to receive treatment. He asserted his facilities are not prisons, but hospitals.