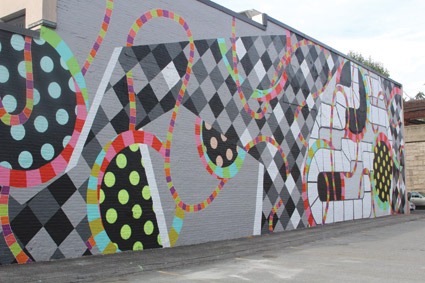 The city’s newest mural is located on the side of the A.W. Gifford Lock building at 11 Lyman St.
Reminder Publications photo by G. Michael Dobbs

SPRINGFIELD – The abstract shapes and combination of colors of Kim Carlino’s new huge mural on the aide of the A.W. Gifford building on Lyman Street are pleasing enough, but when Carlino revealed her inspiration during the painting’s debut were the board game designs of former Springfield business Milton Bradley, one could instantly see what she did.

Carlino was joined by Mayor Domenic Sarno, Morgan Drewniary, executive director of the Springfield Central Cultural District as well as other officials and downtown residents at the formal introduction of the 100 feet long and 20 feet high painting on Oct. 11.

Sarno said the mural “sends a message of vibrancy.”

The project was funded through a $5,000 City of Springfield Community Development Block Grant award, under a new Public Art program developed by the city. The city also helped support this project through the Neighborhood Storefront Improvement Program, which assisted A.W. Gifford Lock in repairing and preparing the wall for the mural application.

Drewniary said this is an example of the arts as economic development and reminded the audience cultural activities adding $50 million annually to the city’s economy.

Carlino explained, “I love games of any kind. I love playfulness.” She added the many board games and their design manufactured in the city by Milton Bradley were her inspiration.

“I believe games have the power to connect and that’s what we need right now,” she said.

During the three and a half weeks of production, Carlino said downtown residents would come up to her and saying “thank you for making my home beautiful.

The Easthampton-based artist told Reminder Publications she had exhibited her paintings at the Bing Arts Center in the past, but didn’t know much about downtown until she was chosen through a Request For Proposals process.

She enjoys working in a large scale and this project was her largest yet. She explained the exterior wall of the long-time locksmith business had to be repaired to make for a better painting surface.

Because of the weather and a group of students who had to return to college, her completion time went from one week to three and half.

The size of the building required renting a scissor lift to bring her to all of the surfaces. She explained that painting on that size surface meant she would go up, paint, come back down, and walk a distance to judge what she had done.

“Your process is on review for the public,” she said.

Although the mural corresponds to a drawing she submitted to the city, Carlino said she allows herself some room for improvisation.

She said she would welcome the opportunity to paint and design another mural.