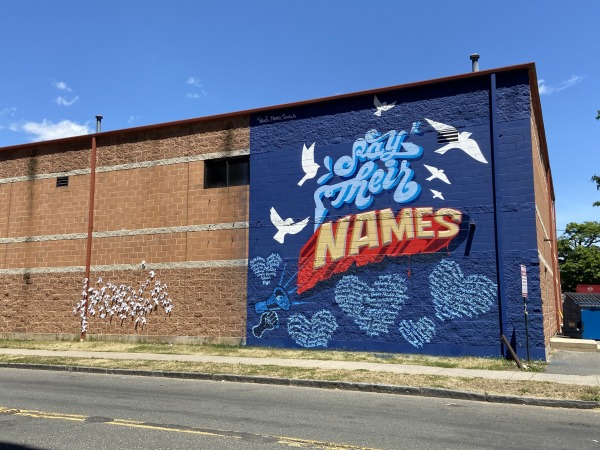 The “Say Their Names” mural depicts the names of at least 75 black people who have been killed by law enforcement in the past 12 months.

Because the mural will only contain the names of people killed in the past year, many names will not be listed. To commemorate them, pieces of paper cut in the shape of doves were available so people could write names and messages. The doves were put up on the side of the building next to the mural as a temporary memorial art piece.

The three artists, Wane One, Souls and Nero, donated their time and artistry. One said the mural is a place where people can come to contemplate the loss of lives.

Kyreem Tabar Kynard, an artist who works in rap, spoken word and many other mediums, performed an original song that he dedicated to young people. He first recited it, speaking directly to children in the crowd, and then performed it to music.

About 30 people came out to commemorate the creation of the mural, including state Sens. Eric Lesser and James Welch.

The mural was a project that grew from the community. Originally the idea of Rosemary Tracy Woods, curator and owner of Art for the Soul Gallery, she brought the idea to Ron Johnson, director of Martin Luther King Family Services, they worked with Britt Ruhe of Commonwealth Murals to find artists to bring the idea to life.