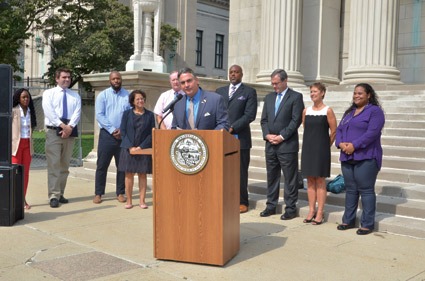 RiseUp Springfield is a collaboration among the Association of Black Business and Professionals (ABBP), Springfield Regional Chamber, Massachusetts Gaming Commission and Interise.

Sarno said the city is undergoing $3.3 billion in economic development, including the over $1 billion MGM-Springfield project. “There has been a tremendous amount of spinoff that has occurred here in the city of Springfield,” he said.

The mayor wants small businesses to share in the economic development windfall, growing their businesses and creating new jobs.

“A lot of people who open up their small businesses put their blood, sweat and tears to do that,” Sarno said. Many small businesses lack the technical assistance or other support to grow and to be successful, he added. “It’s extremely important we continue to support our small businesses.”

Sarno said while the large projects may get all the press, the city remains “cognizant” about the needs of small businesses.

RiseUp Springfield will use Interise’s StreetWise MBA curriculum, a hands-on program for participants who seek growth and getting a clearer understanding of the financial, operational and employee development aspects of a business.

“Whether we’re dealing with a mega-project or a corner store, we want to make sure you continue to thrive in Springfield,” Sarno said.

Nancy Creed, president of the Springfield Regional Chamber, said, “The chamber is excited to be part of this unique and collaborative effort. It’s our mission to grow businesses, small or large here in Springfield and the region,” she said. “We truly believe that when one business thrives, we all thrive.”

“Everybody coming to the table together is something we rarely see. When we do see it, it works successfully,” Stebbins said.

Interise launched similar programs in Boston and Worcester and is nationally recognized, according to Robert Jones, the client relations manager for ABBP. He said the amount of money being invested in Springfield is unprecedented.

“I’m here to make sure we’re spreading the wealth in the black and minority business community and professionals to get that business acumen up, give them opportunities they may not normally come across,” Jones said.

Bernard Johnson, of Interise, said the organization’s curriculum is geared toward low-income communities. The program focuses on capacity, collaboration and building relations with larger businesses.

He said Interise helps small businesses “scale” their operations to be competitive.