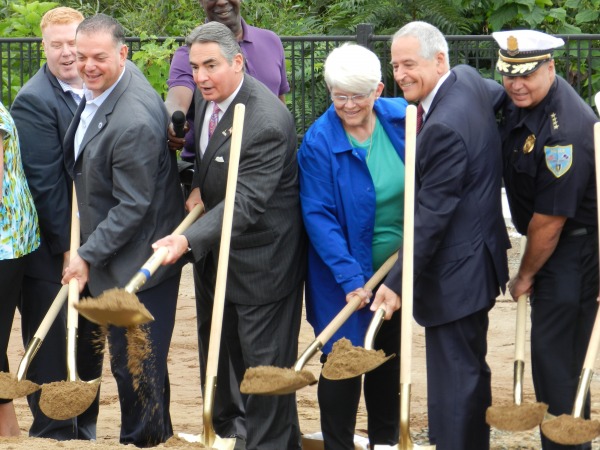 Mayor Domenic Sarno, Georgianne Roberts, Frank Collaccino were among the dignitaries who participated in the groundbreaking of Springfield’s 9/11 monument.
Reminder Publishing photo by G. Michael Dobbs

SPRINGFIELD – As the nation marks one more yearly anniversary for the attack on Sept. 11, 2001, Springfield officials gathered at Riverfront Park on Sept. 7 for the groundbreaking of the city’s monument to the first responders who lost their life that day.

The monument will feature a piece of steel I–beam that was part of the World Trade Center. The 9.5-foot tall I-beam will stand vertically in front of a bronze wall which will have the names of 498 first responder heroes engraved on it.  At night, the artifact will cast the shadow of the Twin Towers on the wall and names.

Dennis Duquette, president of the MassMutual Foundation, said the monument would be “a terrific testament to the people who lost their lives at 9/11.”    Mayor Domenic Sarno said the monument will “remind people of the sacrifice they made.”

Police Commissioner John Barbieri said of the first responders, “they knew going into the building the odds they weren’t coming out was very high.”

For Steve Roberts, one of the donors to the monument project, there is a personal connection to that day. His son-in-law Rolland Combe was introduced to his now wife Rachel Roberts by Combe’s best friend, the late New York City Firefighter Brian Edward Sweeney.

Sweeney was among those killed responding to the attack that day.

Roberts said, “It was a dreadfully tragic day that affected all our lives … every life lost will always be remembered.”

The monument’s designer, Bruce Rosenbaum of Modvic, said that it was an incredible honor to work on the monument and that when he saw the I-Beam “my heart jumped.” He said that by touching the beam he felt a physical connection to the event and felt both sadness and the commitment made by the first responders.

Donations are still be sought to pay for the monument, They can be made by sending a check to the Spirit of Springfield/September 11th Monument, 1350 Main St., Suite 1004, Springfield MA 01103 or by going to gofundme.com/springfgieldseptember11th monument. All donations are tax-exempt.