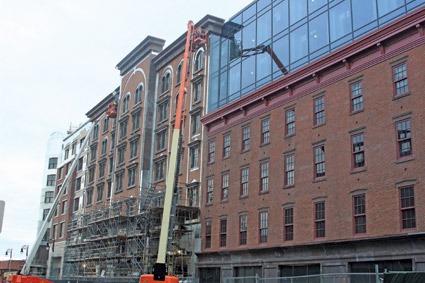 Workers are putting finishing touches to the exterior of the hotel area of the MGM Springfield casino project.
Reminder Publications photo by G. Michael Dobbs

SPRINGFIELD – The registration of two domain names – MGMBostonHarbor.com and  Mohegansunspringfield.com adds more fuel to the speculation that a sale of the MGM Springfield casino project may become a reality.

Both domain names were registered at Godaddy.com and both were assigned on March 15.

Speculation has also been heightened by a statement made by Wynn CEO Michael Maddox. The Boston Business Journal reported an emailed press release that read in part, “We remain very excited about the Boston market. However, our obligation to shareholders is always to maximize the value of our assets and to mitigate risk.”

The Massachusetts Gaming Commission has been investigating aspects of the Wynn development. At its April 12 meeting the  commission received  requests  from  attorneys  representing  former CEO?Steve  Wynn,  Wynn  Resorts  Limited and  Wynn  MA  LLC  that  Steve  Wynn  no  longer  be considered  a   qualifier  for   Wynn  Boston   Harbor   based  on  his  resignation  and  divestiture  from  Wynn  Resorts.

While the Wall Street Journal reported on April 12 there have been talks between MGM Resorts International and Wynn Resorts Limited for MGM to buy the Wynn casino now under construction near Boston, both state and local officials have had muted responses.

MGM’s official statement on the report is as follows: “We do not comment on rumors or speculations around transactions.  We remain fully committed to the opening and success of MGM Springfield.”

When Reminder Publications posed questions to the Massachusetts Gaming Commission, rather than statements that would clarify,  parts of the Commonwealth’s gaming legislation were forwarded as answers. The Commission would not comment on the story itself.

One thing is clear, MGM could not own two entities under the law, therefore if it did proceed with a purchase, it would have to sell the Springfield project.

As far as a transfer or sale of the casino, the legislation notes the company that buys the Springfield casino would have to live up to the current terms with both the state and the city.

The legislation reads in part “all terms and conditions contained in the gaming license, operation certificate, host community agreement, surrounding community agreements, impacted live entertainment venue agreements, and any other associated agreements, and all permits, licenses, and other approvals issued by any federal, state, and local governmental agencies concerning the construction and operation of the gaming establishment. Additionally, the written agreement shall include an attestation from the transferor and transferee, accompanied by relevant supporting documentation, that said transfer comports with all applicable terms and conditions of the aforementioned instruments including any pre-approval requirements contained in a governing host community agreement.”

When asked for a statement, Mayor Domenic Sarno replied, “I have consulted with our legal team and we are satisfied with our Host Community Agreement protections. I don’t want to speculate on what MGM might or might not do. I have been contacted by MGM Resorts International President Bill Hornbuckle and MGM Springfield President and C.O.O. Mike Mathis to reassure me of their continued commitment to a first class resort in Springfield.”

Selling and buying casinos is not out of the ordinary for MGM. In 2000, it acquired Wynn’s Mirage Resorts, Inc. for a reported, according to the New York Times, $4.4 billion. That deal gave MGM Mirage, Treasure Island and the Bellagio casinos, as well as a half-interest in the Monte Carlo in Las Vegas and other casinos in Nevada as well as in Mississippi, Detroit and Australia.

On April 16, MGM Resorts International agreed to sell the Grand Victoria Casino in Elgin, IL, of which it owned 50 percent. The company acquired the casino in Illinois when it bought the Mandalay Resort Group in 2005.

City Councilor Tom Ashe told Reminder Publications, “I've seen the mayor’s response so I am aware that MGM is legally bound under the Host City Agreement so the city of Springfield is protected. I am hopeful that this is simply conjecture and that we are moving forward with the project as has been presented.”

Councilor Adam Gomez said, “With all the speculation, this most likely warrants reasons to wonder if this could be a possibility. I want to reassure that regardless of what is reported I’m dedicated in making sure that the voters of Springfield are best represented when holding MGM accountable to their host community agreement. They have been accessible, attainable, and fulfilled majority of their obligations up to date, they just received an okay from the Gaming Commission to complete their responsibility to complete the market rate housing. We are in our last leg in this process to opening day. Our focus should be getting our city trained, employed, and ready for September to achieve a successful economic renaissance. I have spoken to executives at MGM and they have reassured they are dedicated to MGM Springfield. We can only move in the direction we have been moving and that’s MGM Springfield.”

City Councilor Jesse Lederman said, “I am closely monitoring these reports and have spoken with fellow elected officials including Mayor Sarno regarding what they could mean for Springfield. Our attorneys have assured me that our Host Community Agreement with MGM is iron clad. I remain committed to holding MGM accountable to the promises they’ve made to the people of Springfield. MGM also reaffirmed their commitment to the Springfield project this week. Should there be additional developments I will call for a Casino Oversight Committee Meeting.”