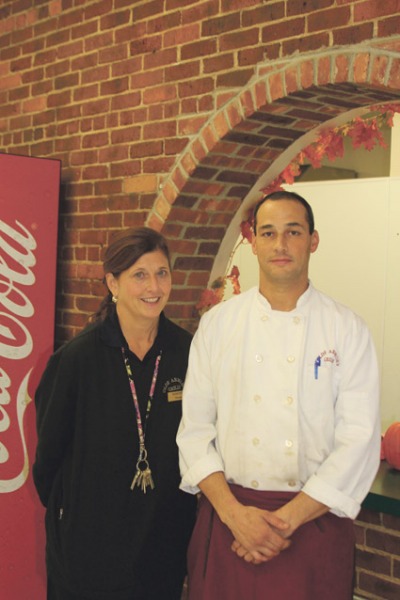 Cpl. Maryanne Alben and Jack Curley manage the Old Armory Grille, a program that for the past seven years has helped inmates from the Hampden County House of Corrections gain skills that lead to jobs.
Reminder Publications photo by G. Michael Dobbs

SPRINGFIELD – It’s mid-morning and the aromas from the Olde Armory Grille are enticing. Inside the spotless kitchen, workers are busy preparing for lunch.

The average customer may not know the restaurant has a mission besides serving good food. It is a program of the Western Massachusetts Correctional Addiction Center and has just completed its seventh year of providing inmates with skills that lead to jobs after their incarceration ends.

Cpl. Maryanne Alben runs the management side of the restaurant, while Jack Curley is in charge of the kitchen. The inmates come from the Hampden County Jail in Ludlow, the Women’s Jail in Chicopee and the Western Massachusetts Correctional Addiction Center.

The restaurant employs eight to 10 inmates who are at the end of their sentences, Alben told Reminder Publications. The goal of the program is to provide offenders with job skills and so far 85 percent of the 62 inmates who have participated in the program have found employment in the food service business.

Alben noted all of the offenders go through training that leads to their receiving a ServSafe Certificate, which is a prerequisite for those entering the restaurant industry.

Curley pointed to a whiteboard in the kitchen on which there was a food handling safety question. He said everyday the inmates are asked a question that reinforces the ServSafe curriculum.

Alben said many of the inmates who go through the program have never had a job, and that many of the women inmates have been dependent on men.

The inmates go through an interview process to participate in the program and Alben explained some are skeptical. Generally after being in the program for a week or two, the inmates are sold on it. The average length in the program is two to three months, she added.

One way to introduce the inmates to potential employers has been to invite restaurant chefs to spend a day with the staff, teaching them to prepare a meal, Alben explained. That way the chefs know the inmates and what they can do when they apply for work.

The prices are kept low enough, Alben explained, to just cover the expenses of the program. During the past fiscal year, the Grille paid $12,169.59 in meals taxes to the Commonwealth.

Alben, who has been with the program since the beginning, said that at first some people were wary of having inmates at the Technology Park. She recalled visiting every business at the location to explain how the program would work.

“It took a lot for the community to accept us,” she said. “Any time you hear inmates are around, people get scared.”

The staff and the customers are on first-name basis, though, as part of the customer service skills the staff learns, Alben added.

Gerry, one of the staff members, once worked in a restaurant in his native Puetro Rico. “I like to learn new things all the time,” he said of the training.

He added, “This is a good program. I’d recommend it to anybody.”

Another staff member, Jodie, said she “loves it.” She explained that with the ServSafe certificate, “it can take you anywhere.”

She believes more programs such as this one should be made available across the Commonwealth to inmates and said, “It makes them feel better about themselves out dealing with the real world

Sheriff Michael J. Ashe, Jr. said, “Seven years ago there was some skepticism that a restaurant could be successful with inmate workers. What we now know is that not only does this restaurant generate monies to send back to the state budget, but that 85 percent of its employees leave with the work habits and skills and certification to gain and keep employment after release. This whole restaurant, in its conception and its implementation, is a winner for the taxpayer and for the offender looking to build a positive, productive, law-abiding life in the community.”