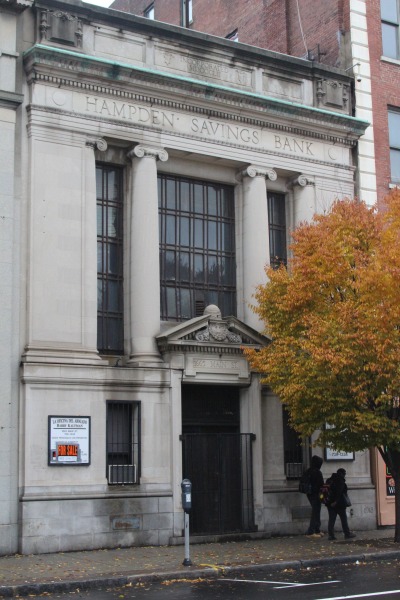 The former Hampden Bank building, built in 1918 and now vacant, would be the home of a recreational cannabis store if the plans of Diem Cannabis are approved by the Commonwealth and the city of Springfield.
Reminder Publishing photo by G. Michael Dobbs

SPRINGFIELD – An Oregon company that has been in the legal marijuana business for the past three years would like to transform a historic bank building on Main Street into a recreational cannabis store.

Diem Cannabis conducted its first public meeting on Nov. 3 outlining its proposal. The meeting was the initial step in a detailed process to obtain a license for the shop.

The company’s CEO, Chris Mitchem, said Diem operates seven cannabis licenses in Oregon and intends to apply for three dispensaries and a farm in Massachusetts. To accomplish that goal, the company has raised $12.5 million.

According to a report in Bloomberg news, that $12.5 is an investment made by Tidal Royalty, a Canadian company that is investing in what is described as “the green rush” in the United States as more states change laws on marijuana.

Diem has been approved in the town of Orange to operate a facility that would extract chemicals from cannabis as reported in a recent story in the Greenfield Recorder.

“The biggest barrier [we have] is we’re the out of town guys,” Mitchem said to the approximately 20 people who attended the meeting. He added the company doesn’t want to exclude any “local players.”

He said, though, the “out of town” money will stay in Springfield.

In Springfield, Mitchem said the company has set its sights on the former Hampden Savings Bank building at 1665 Main St., across from the Paramount theater block. He said the building, which is vacant now, would be restored to its original look from 1918. Much of the architectural details have been maintained, although Mitchem said the cost of renovation would be about $1 million.

The location, he added is what the company has looked for: a high traffic area with access to “everyday people.”

He also believes the location would prove to augment the tourism draw created already by other attractions in the city.

The location is in compliance with the regulation of being 500 feet from a school and 50 feet from residences, Mitchem noted. There would be a no loitering rule outside of the building. “No one would be lighting up in front of the store,” he added.

He said the company is planning to successfully apply for seven licenses in the Commonwealth and employ 35 people. He said the staff, who he called “budtenders,” would be paid above minimum wage.

As in Oregon, the store would employ software that features “seed to sale tracking.” The software would provide information on when and where the cannabis was grown and when it was sold.

Mitchem emphasized the security plan for the proposed Springfield location. Besides security cameras that could cover every surface, there would be an armed guard and the bank’s vault in the basement, which is still intact, would be used to store inventory.

Diem Operations Manager John DiNovella said the store could be open from 8 a.m. to 9 p.m., although the company would cooperate with the city on the hours Springfield officials would set.

Although the location has no dedicated parking area DiNovella said the store would urge people to use the parking garage less than a block away at Union Station.

When asked how his legal store could compete with street dealers, Mitchem said in Oregon the legal shops have eliminated most of the black market. Although the legal shops check identification and have a 20 percent sales tax – Oregon has the same amount of tax as Massachusetts proposes – it’s the quality of the product they sell that has affected the street dealer. He said 20 percent level of taxation allows them in Oregon to compete with price.

In general those who are still in the black market business in Oregon export their product to other states that have not yet legalized cannabis, he said.

One of the audience members, Kathy Brown, suggested that if Diem is approved it should sponsor educational program for youth under the age of 21, which would be the prime market for illegal sales.

Mitchem explained the amount of THC, the chemical that gives users a high, is carefully regulated in every product, providing a greater element of safety, which their customers appreciate.

Mitchem noted the company “really believes youth shouldn’t be using cannabis.” He added that any edibles the company sells comes in packing that is designed not to be opened by children.

To move forward the company has to undertake a lengthy and detailed application process that includes forging a Host Community Agreement with the city.

Mitchem said he sees his company in “partnership” with the city.