Overland Building to open for rentals on Dec. 1 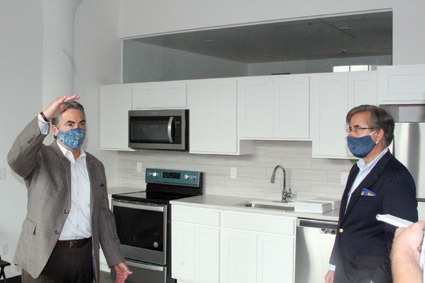 Mayor Domenic Sarno is shown one of the apartments by Juan Prieto of the Davenport Company.
Reminder Publishing photo by G. Michael Dobbs

SPRINGFIELD – A historic building has found a new use. Last week, Mayor Domenic Sarno toured the renovated Willys-Overland building on Chestnut Street to view the progress of how developers are adding 60 new market-rate apartments to downtown.

Chuck Irving of the Davenport Company, the owners of the building, said the project continued despite “the tough economy” due to the pandemic and is expected to accept tenants on Dec. 1. He said the apartments are offered at rental rates for “normal working people,” and anticipates that teachers and college students will be among the tenants.

He pointed out the expected synergy between having more apartments close to the Union Station transportation center, a situation that has developed in other communities.

The Willys-Overland Building was constructed in 1916 by the automotive company of the same name and was named on the U.S. National Register of Historical Places. According to information from the National Park Service, it was designed as a sales and service facility with a garage large enough for 1,000 cars.

Willys is best remembered today as the company that developed the Jeep.

The building had been damaged in the 2012 gas leak explosion and had been vacant.

Irving said the pandemic had affected the design of the building. Instead of a common laundry room, each apartment has its own washer and drier. The HVAC is also singular to each dwelling, as well, Irving said.

He said that historic tax credits were essential to the project. “Without them, the project would not be happening,” he said.

The project represents a $14 million to $16 million investment, Irving said.

The four-story building has one bedroom, two-bedroom and duplex units. Irving noted the apartments are not all identical to one another in layout.

Besides the apartments, the first floor is divided for two purposes. There is an interior garage large enough for 22 cars, which also features recharging stations for electric cars. There is also first floor retail space that will be developed. One potential tenant toured the building with the mayor.

Sarno said, the Davenport Company has been “very bullish” about Springfield and Irving said the company has bought 135-141 Lyman Street for potential redevelopment into more housing.

The mayor said the city has not “taken its eye off of economic development” and predicted the city will “rebound quickly and strongly.”

He declared, “If you want to do business, come to Springfield.”