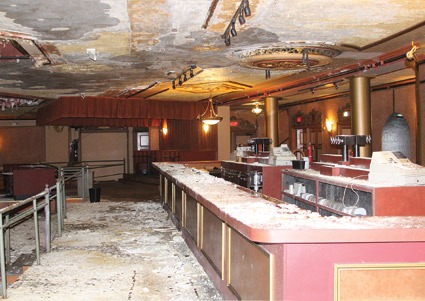 Gov. Charlie Baker made the announcement for the Paramount Theater redevelopment project with Heriberto Flores, president of the New England Farmworkers Council looking on. (right) The damage from leaking water is evident with fallen plaster on the theater’s bar.
Reminder Publishing photos by G. Michael Dobbs

SPRINGFIELD  – The next chapter in the history of the Paramount Theater was announced on Oct. with a $2.5 million state grant that would be used to help jumpstart the effort to preserve and redevelop the historic block.

Gov. Charlie Baker announced the grant would help the New England Farmworkers Council, the non-profit that bought the Paramount block in 2011, develop the office space into a boutique hotel and preserve the theater as a performance space.

Baker called the project a “multi-service/multi use development.” He added the Paramount redevelopment is one of the “signals we’re heading in the right direction in the city of Springfield.”

As Vanessa Otero, the COO of the Farmworkers Council explained, the theater was built in 1929 at the location of the former Massasoit Hotel. It was a successful movie theater for decades that also featured stage acts.

The goal now is to restore the 1,800-seat theater, while building an 85-room hotel out of the office space in the block. Otereo said the project would create 75 full time jobs.

The price tag for the redevelopment is $41 million and will be made up of both private and public funds, she said.

Heriberto Flores, the president of the Farmworkers Council, told Reminder Publishing the redevelopment would start this fall with a new roof and windows to secure the building. The project should take two years.

Inside the Paramount, a leaking roof threatens the gold gilt on the wood and plasterwork. The sound of water falling from the ceiling was very evident at the press event as well as of its effects in the form of plaster pieces on the floor.

The Farmworkers Council bought the theater in 2011, after it had been used as nightclub from 1999 with the name “The Hippodrome.” Initially the non-profit staged events at the theater.

In 2013, Flores became part of the casino development as proposed by Penn National. The company announced its casino would not have an entertainment venue but would use the Paramount, which was a short walk away from the proposed site of the former Peter Pan Bus Station and The Republican building.

Flores added the Stone Wall bar across Gridiron Street from the Paramount would be part of the redevelopment project. “We’ll be doing something with it,” he said, adding it may be a private club.