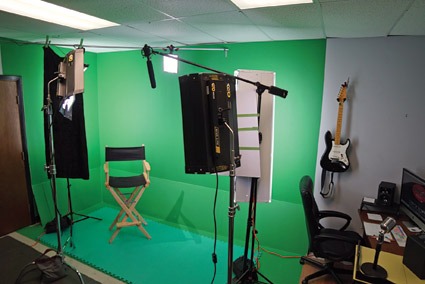 SPRINGFIELD – Need an image that includes an exotic location only your budget doesn’t include the cost of a trip? William Eagan has the solution.

Eagan, who operates Eagan Pictures at Gasoline Alley on Albany Street, now has a green screen that is available to rent for both still and video productions.

He showed how commercial photographers and others could take advantage of the technology that allows the seamless combination of digital images. He showed a head and shoulders portrait before and after, with the final image including a background selected by the client and the photographer.

Eagan, who is both a photographer and a videographer, had been running his business from his home in Longmeadow, but realized he didn’t have the space to grow. He spoke to Joseph Sibilia, who runs the business incubator program at the Gasoline Alley complex and developed an idea for not just an office for his business, but also for a singular service to fellow photographers.

“Because Gasoline Alley is such an innovative small business environment and the surrounding McKnight District has developed into such a creative hotspot, we decided to move Eagan Pictures from our Longmeadow location to Springfield,” he said.

Offering his green screen for rent gives his business an additional service to offer, he explained.

“We moved in November [to Gasoline Alley] and it’s been great,” he added.

The rate of $100 an hour offers “a pretty affordable option for production,” Eagan explained.

While some photographers use a green tapestry to achieve a similar effect, Eagan explained the lighting he has installed makes a big difference to the overall quality of the image.

A photographer since age 11, Eagan has seen many changes in technology since he was given his first single lens reflex film camera. Despite some of those changes that make photography easier, Eagan said there is still a great need for images beyond the capacity of a cell phone.