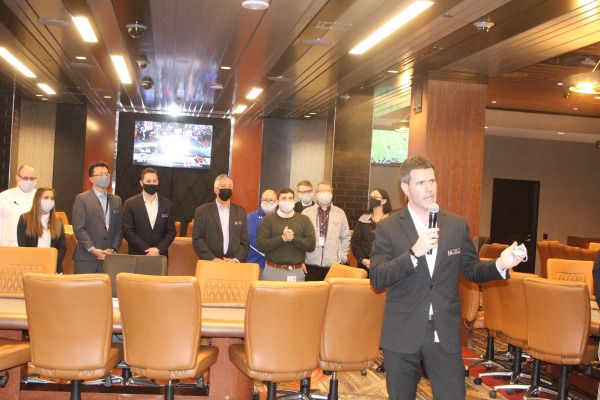 MGM Springfield President and COO Chris Kelley expressed his thanks to the casino staff for their work during the height of the pandemic.
Reminder Publishing photo by G. Michael Dobbs

SPRINGFIELD – At a time when many pent-up demands among Americans are evident, it was clear there is considerable demand for poker in Western Massachusetts.

MGM Springfield re-opened half of its poker room on Oct. 29 and at least 60 people were waiting to sign up for a table.

MGM Springfield is the only casino in the commonwealth that is offering poker. Encore in Revere has not yet decided to re-start its poker operations.

There are still continued health and safety procedures for the poker room: 13 tables will be open; up to nine players will be at each table; there will be live cash games; and daily play is from 11 a.m. to 3 a.m.

MGM Springfield President and COO Chris Kelley said when expressing thanks to the casino’s staff, “When the waters are calm that not when the ship and crew are test. They have been tested for the last 18 months.”

Kelley noted how 13 tables were being opened, about half of the capacity for the room. One patron standing line urged Kelley to open up the rest of the room. “We’re all in, baby,” the customer added to the applause of the other people waiting in line.

Robert Westerfield, the vice president of casino operations, told Reminder Publishing, that while poker does not make as much money for the casino as other games, “it’s another amenity we offer.”

Westerfield also spoke about other attractions at the casino that have not yet been re-opened. He noted casino management is considering a new tenant for the former church building that housed Kringle Candle before the pandemic. The Commonwealth bar is back in operation and is open Thursdays through Sundays. There is “nothing in the works” as yet for the space that featured the casino’s Italian restaurant. The Roar Comedy Club in the Armory building has re-opened. The Free Music Friday Concert Series was moved inside with the last show of the series featuring Trailer Trash will be presented at 7 p.m. on Nov. 5.

Westerfield said the casino is “trying to be strategic [about reopening attractions.]”

With Springfield’s latest mask mandate ending on Nov. 1, he added customers will not be required to wear masks while at the casino, but employees will still wear masks.