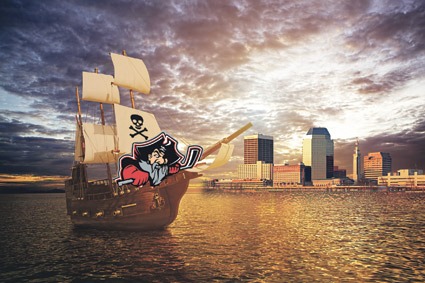 SPRINGFIELD – Weigh the anchor, hoist the sails and ready the cannons; the Portland Pirates are on their way.

A Springfield-based investment group that set its sights on keeping hockey in Springfield announced it scored its biggest goals of the offseason, essentially ensuring an AHL team for the City of Homes.

The American Hockey League’s Board of Governors unanimously approved the sale and relocation of the Pirates from Maine to Springfield, which clears the way for the team to play its 2016-17 season in one of the league’s charter cities.

“This is a great day for our organization, for the city of Springfield and for the entire region,” Attorney Frank Fitzgerald, representing the ownership group, said. “We are committed to building a successful franchise both on the ice and in the community and we could not have a better partner in this effort than the Florida Panthers.”

Florida Panthers President of Hockey Operations Dale Tallon said, “We are very pleased to announce this affiliation with Springfield. Springfield is a hockey town with a rich history and we’re looking forward to a great relationship with the city and ownership group.”

“Springfield is a Charter Member of the American Hockey League and a proud hockey market where the fans will give our players the support and encouragement they need to develop into National Hockey League players,” Joyce said. “That being said, development is incumbent upon winning, and therefore our roster will include exciting players from top to bottom that will compete hard and win as many games as possible for the great fans and city of Springfield.”

The Coyotes have received necessary approvals to move that team to Tucson, AZ.

Fitzgerald told Reminder Publications he could provide little more information because the purchase of the Portland team had not been finalized as of press time. He theorized the deal could be completed by next week.

At this time it is not known who is involved in the transaction on Springfield’s side of the table. After the sale of the Falcons was announced, former Springfield Falcons President and Director of Hockey Operations Bruce Landon, who brokered the deal to establish the Springfield Falcons in 1994, told the local press he would do whatever he could to maintain AHL hockey in the city, but whether he was involved in this transaction is not known.

Landon announced his retirement in April and declined to comment when contacted after news broke about the potential relocation of the Portland franchise.

Fitzgerald said the members of the group would be identified after the purchase becomes official.

“I can’t wait to publicly thank them. Civic pride is the biggest thing with these individuals and I look forward to making some more statements with them in the very near future,” he said.

Sarno also said he looked forward to the opening of season ticket sales and added the team would build upon the die-hard fanbase with a “dynamic marketing plan.”

While it has been confirmed the team will play in the Eastern Conference, under what name and banner remains to be seen. The team relocating to Tucson will not retain the Falcons name and logo, recently launching a naming contest on the Coyotes’ website; however, whether a new Springfield team would continue to use that brand is unclear. It appears unlikely the Pirates moniker would remain.

The status of a lease agreement between the franchise and the Massachusetts Convention Center Authority (MCCA), which runs the MassMutual Center, was also not immediately known. Neither Fitzgerald nor representatives of the MCCA responded to a query regarding an agreement as of press time. However, prior to the approval of the sale, Springfield’s Chief Economic Development Officer Kevin Kennedy said he had recently spoken with the MCCA about the potential for a new franchise.

“They’re very, very happy about that because they were looking at 40 dark days and nights without this kind of activity,” he said.

In its first year as Florida’s affiliate, Portland finished the 2015-16 regular season with a 41-26-6-2 record, good for fourth in the Atlantic Division. The Pirates fell 3-2 in a best-of-five first round Calder Cup Playoffs series with the Hershey Bears to end the season.

Despite the success, Portland drew only slightly better than the Falcons with an average attendance of 3,363 fans per game.

The Falcons posted the worst attendance in the league, in team history and one of the worst in Springfield hockey history during the 2015-16 season, drawing just over 3,100 per game while missing the playoffs for the second straight year. During back-to-back Northeast Division championship seasons of 2012-13 and 2013-14, the Falcons averaged 3,906 and 3,787, respectively.