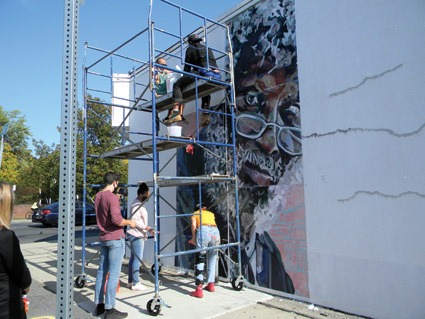 The mural of “Preacher Man” was completed this weekend.
Reminder Publishing photo by G. Michael Dobbs

SPRINGFIELD – A mural of who was described as an “iconic” Springfield resident was completed this weekend at American International College (AIC).

The portrait of Randolph H. Lester, known to people in downtown neighborhoods as “Preacher Man” was installed on the side of an AIC building on the corer of State and Reed streets. The installation was started on Oct. 22 and completed by the weekend.

AIC alum Andrew Cade, president of the Springfield Cultural Council and senior vice president for the Urban League of Springfield, raised the necessary funds to support the effort. “The artist selected to paint the mural of ‘Preacher Man’ is Greta McLain. She has extensive mural making experience, exploring the ways that art can bring communities together, the power of visual language to activate voice, and the potential of art as a vehicle for hands-on organizing and educating,” Cade said.

Cade told Reminder Publishing members of the community had expressed great interest in a mural of Lester, who was frequently seen in downtown streets asking for donations.

Although there is already a mural painted of Lester, it is installed in the W.W. Johnson Life Center and cannot be viewed easily by the public, Cade added.

As Britt Ruhe of Commonwealth Murals explained, McLain used a technique of painting the mural on fabric squares, which were then installed on the wall of the building. McLain was using the installation as a means of training other artists in the technique.

Nicolle Cestero, the chief of staff for AIC President Vincent M. Maniaci, said the installation was in line with the educational philosophy of the college: “Accessibility, Opportunity and Diversity.”