Preservation Trust warns of endangered historic buildings in the city 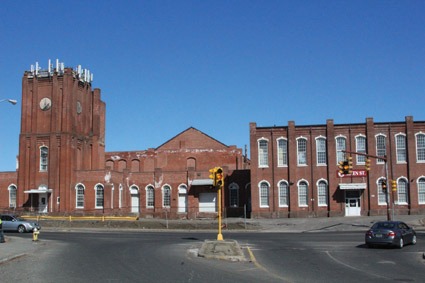 The Watershops complex, once the manufacturing site for the Springfield Armory is among the properties on the 2018 Endangered Historic Resources List from the Springfield Preservation Trust.
Reminder Publications photos by G. Michael Dobbs

SPRINGFIELD – There are buildings you may pass by every day, but don’t notice that deserve your attention and redevelopment.

This is the message of the annual Endangered Historic Resources List from the Springfield Preservation Trust.

Members of the Trust announced this year’s list at the recent annual meeting.

Robert McCarroll told the members there are some new additions to the list, but many are from last year, which means progress has not been made for some historic buildings.

Part of the problem is the return on the investment necessary to bring these buildings back to a productive use, he explained. Depending upon their condition and proposed re-use they may have a restoration budget that would limit future profitability.

He explained some of the buildings are in active peril. The Shean Block is at the corner of Main and State streets abutting 31 Elms St. and has been the topic of discussion for a parking are to support the proposed apartments at 31 Elm St. if that project moves forward.

Part of the Watershops on Allen Street may face demolition, McCarroll said and the Ames and Wallace houses on the campus of Springfield Commonwealth Academy on Maple Street still have damage from the June 1, 2011 tornado.

The former Knox Factory in Mason Square was most recently the home for a tire company, but was once the location where many of the nation’s earliest motorized fire engines were built. That building is now deserted, McCarroll said.

The Gunn Block on State Street across from the campus of Springfield Technical Community College is one of the city’s oldest commercial block, McCarroll said. Develop Springfield bought the building and is in the process of redevelopment, although little has apparently been done recently.

The Hutchins Narrow Fabric Building on Wilbraham Avenue was once the home of the Massachusetts Career Development Institute, which closed in 2013. A fire has destroyed part of the building, McCarroll explained.

The Oak Street Fire Station is currently being used by the city for storage, McCarroll said.

The National Needle Building on Emery Street had been part of the footprint for the proposed Penn Gaming casino, but now faces possible demolition by a developer who has discussed building a hotel on the site.

For additional details about these buildings, go to http://www.springfieldpreservation.org/mehr.