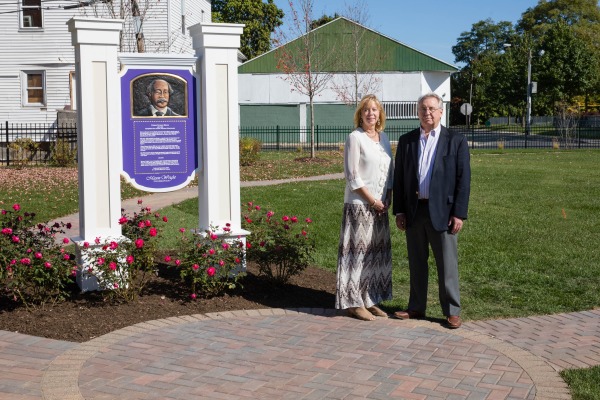 SPRINGFIELD – The African-American businessman and philanthropist who played a significant role in Springfield’s development has been honored by a memorial across the street from the Mason Wright Foundation on Walnut Street.

The memorial presents details on Mason’s accomplishments. It reads, “Born in Monson, Primus Mason spent most of his childhood as an indentured servant. He arrived in Springfield at the age of twenty without education or money but with the determination to succeed. His early jobs included working as a pig farmer, driving horses and wagons, and serving as a horse undertaker. He foresaw how Springfield would grow, and he began investing any money he could save in real estate in the area around what we now know as Mason Square. When Mason died in 1892, he was a highly successful real estate investor who had outlived three wives and his only child. He left most of his estate, more than $25,000, to found ‘a home for worthy old men.’ By 1904 trustees of his estate purchased a large private home at 74 Walnut Street, and Mason Wright has remained at 74 Walnut St. ever since.”

The memorial, which also honors Horace Wright, a cigar manufacturer who died in 1944, who left more than $500,000 in support of Mason’s vision.

Alan Popp, president of the Mason Wright Foundation, explained to Reminder Publishing the memorial had been in the works for 15 months. The Foundation owned about a quarter of the property and acquired the rest from the city through its abutters program.

The memorial to the two men stands in a 13,000 square-foot park, in two long-vacant lots.

According to John Morse, chair of the Foundation’s board of trustees, within a dozen years after Mason’s death, the trustees had formed a corporation, held an annual meeting and purchased a 10-bedroom home on 74 Walnut St. in Springfield, where the Mason Wright campus remains to this day. Mason’s legacy has grown from serving 10 “worthy old men” to serving more than 600 seniors and children each week through assisted living, in-home care and early childhood education.

During the construction and then since the recent opening of the memorial, Popp said people passing by either walking, biking or in cars have commented on the beauty of the park.

The Primus Mason Memorial is open to the public seasonally, seven days a week from 9 a.m. until 4 p.m.